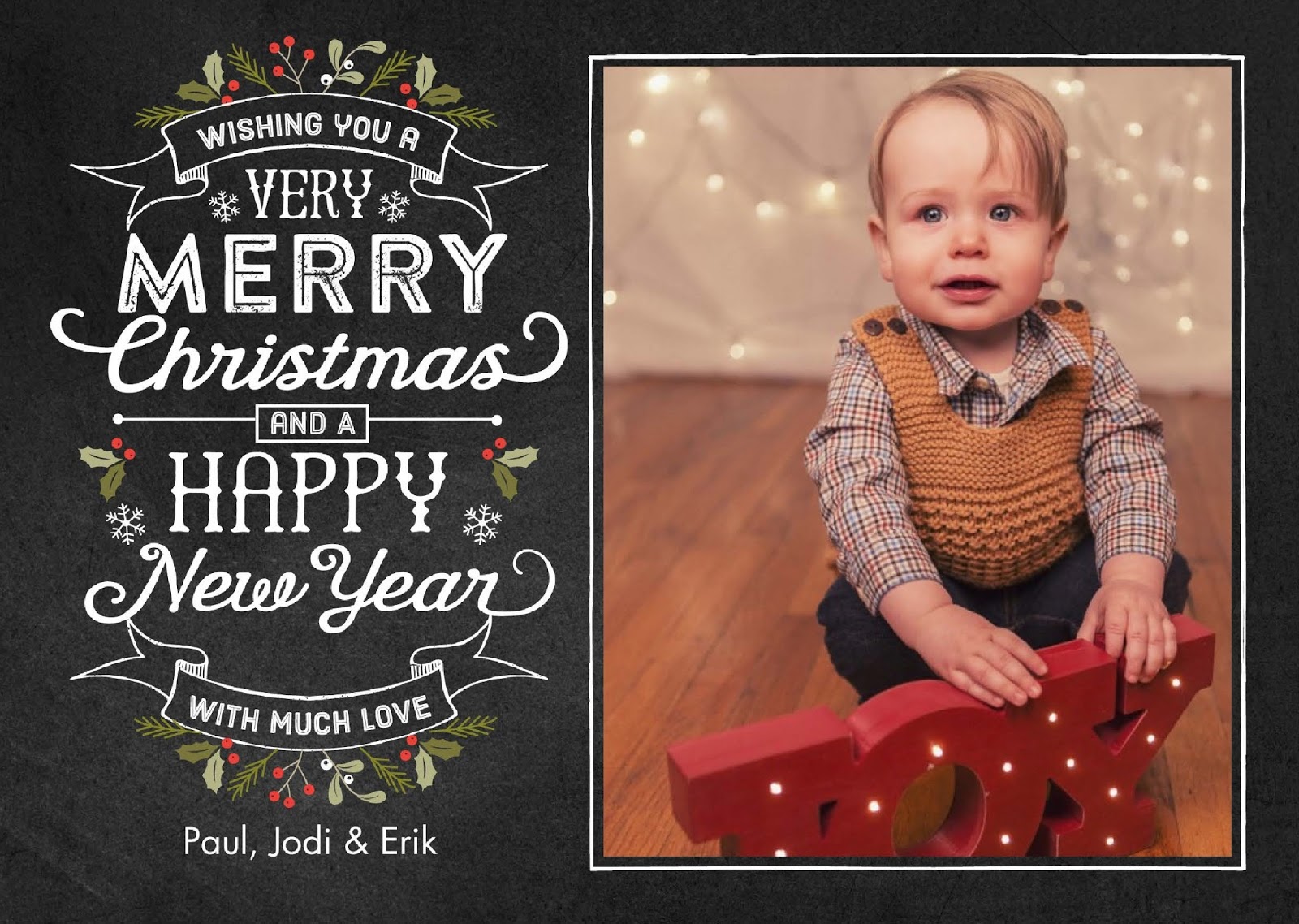 Wishing you holidays filled with peace, joy, love, and warmth.
Posted by Jodi at 3:05 PM 5 comments: 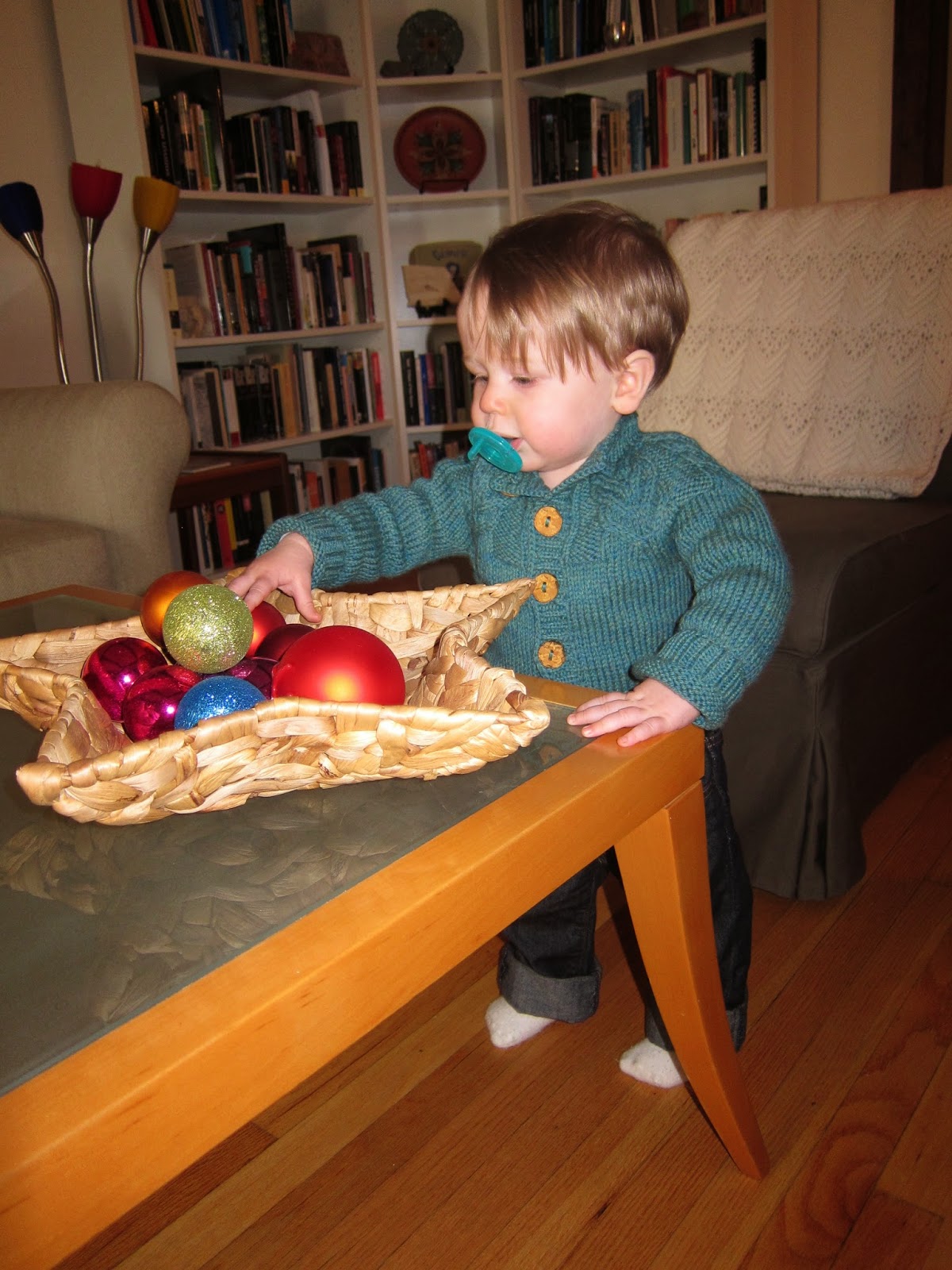 Saturday night I dug out some cardigans that I had knit for Erik that needed just a few finishing touches, and we settled in for our annual viewing of Elf. Many belly laughs later, Erik had a new cardigan to wear! It will fit him for approximately five minutes, so I wish that I had sewn on the buttons sooner, but that's how it goes. 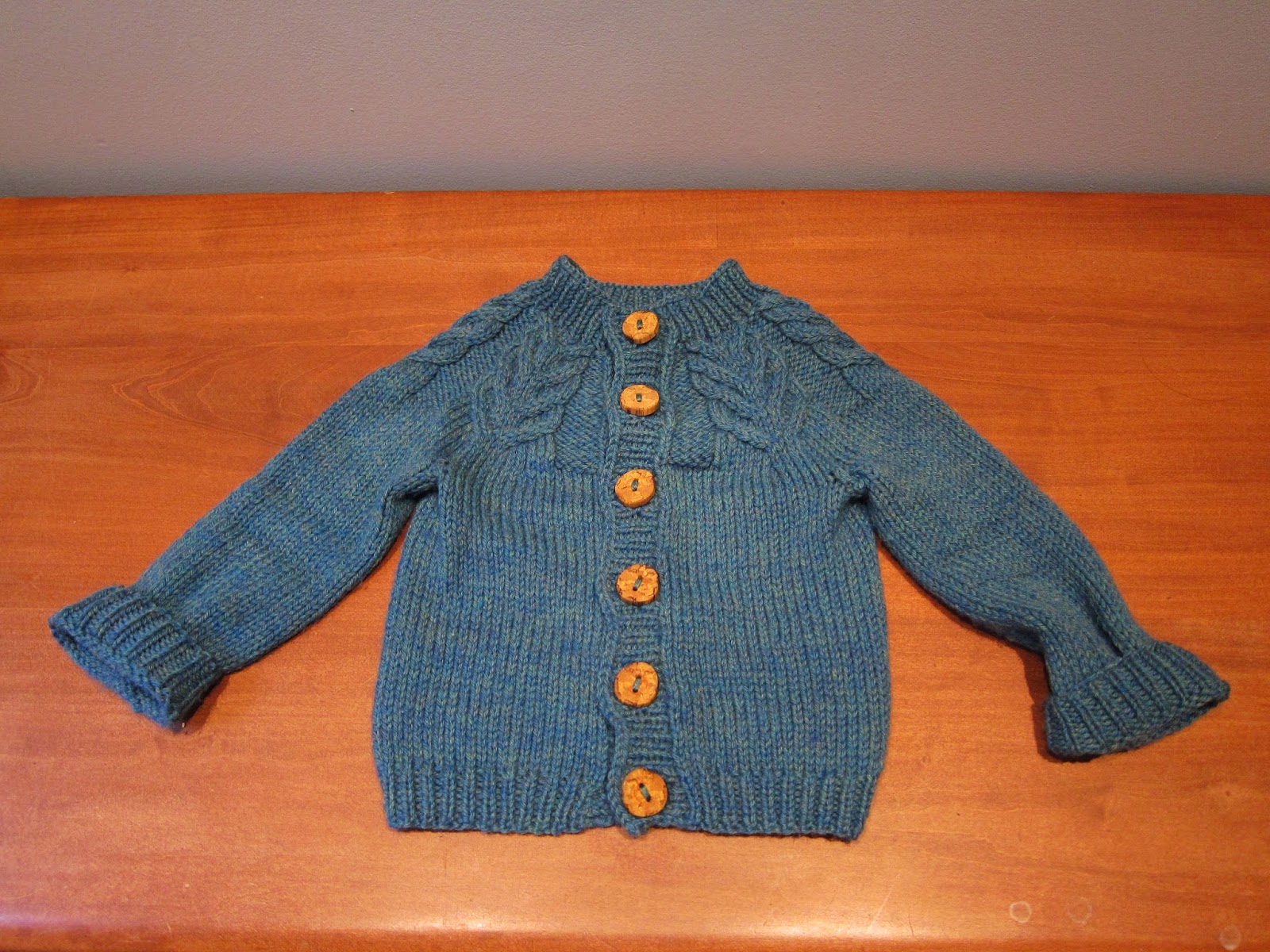 notes:
The pattern is easy to knit and went very quickly. The sleeves are way too long as written -- I shortened them a tad, but should have shortened them by at least another 2 inches. Erik is tall, but his height is all in his torso (not in his arms) -- if I were to knit this again, I'd lengthen the body of the cardigan, too. 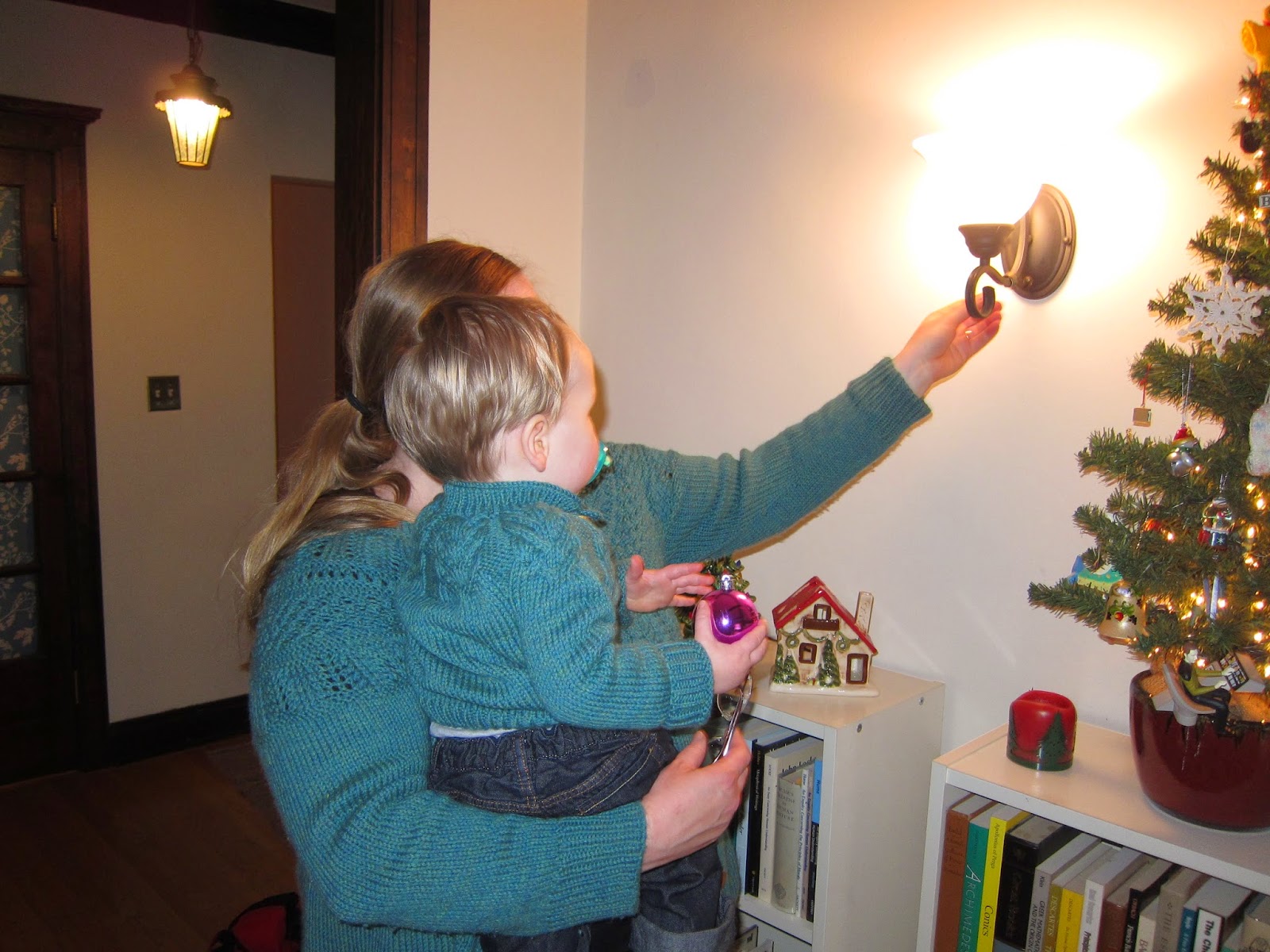 The yarn is leftover from my Drops cardigan, which I just love and wear all the time. So cozy and comfy! 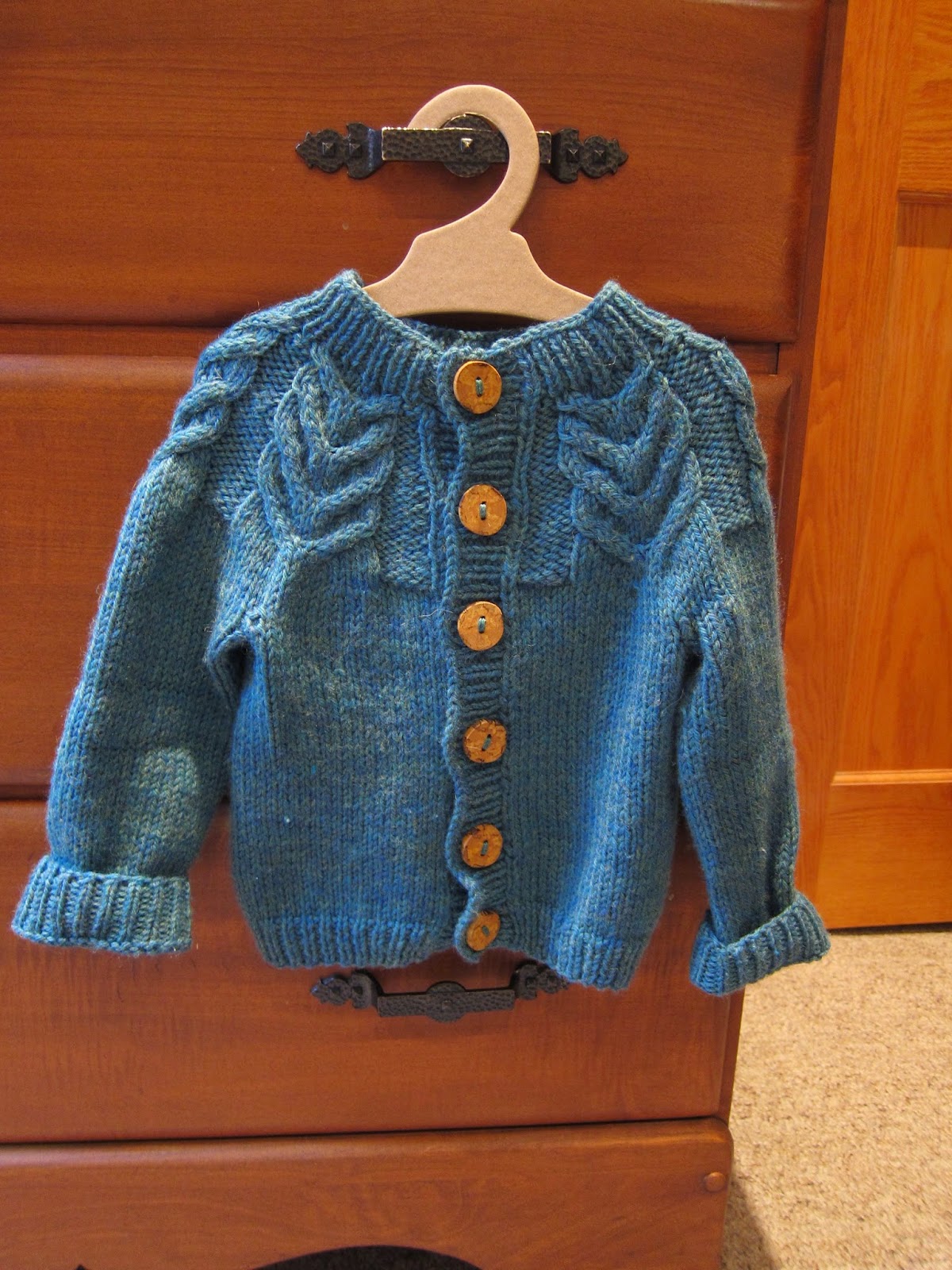 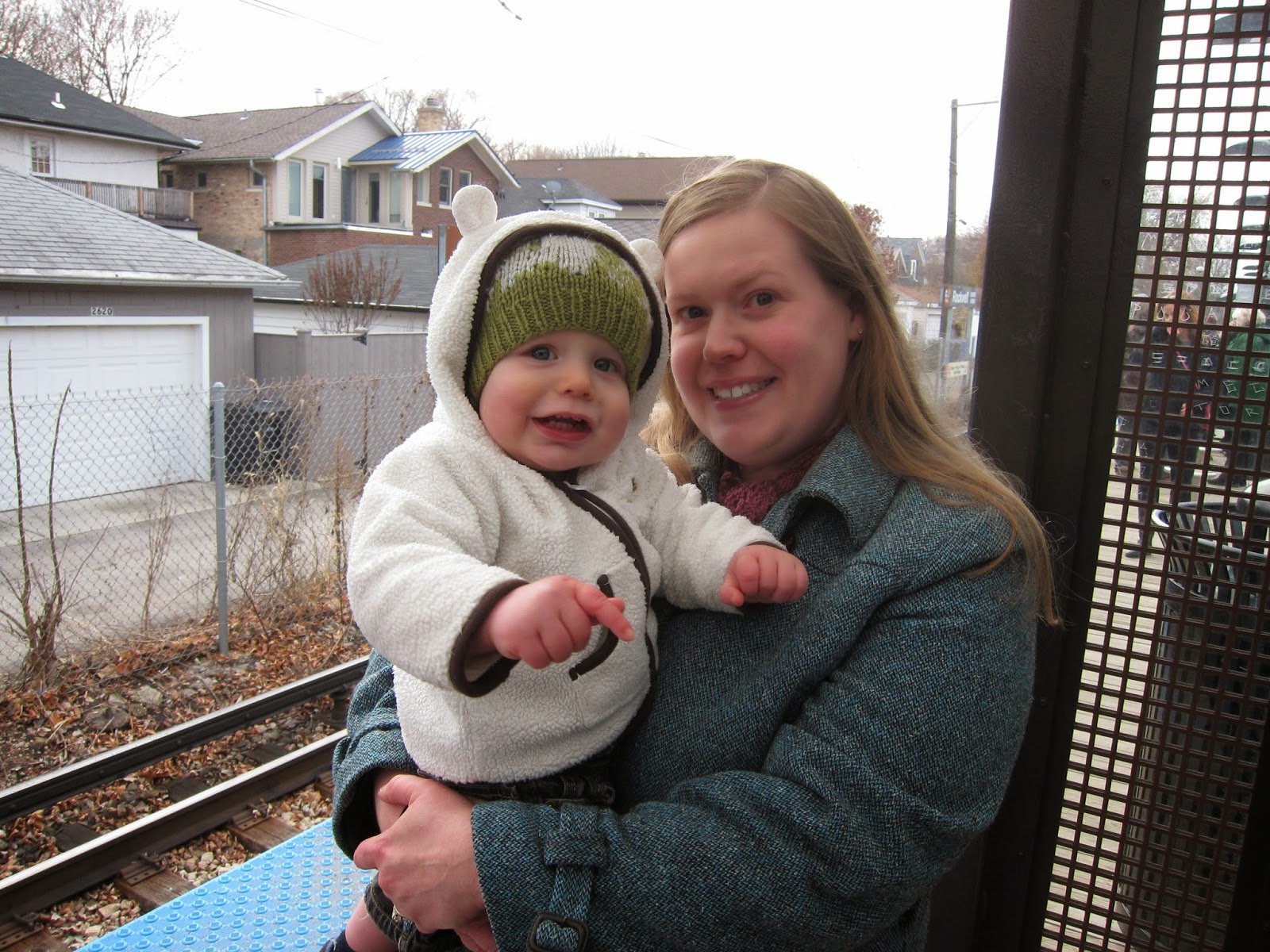 Plenty is left on my to-knit list before the holidays, some quick and easy -- a Minnesota Vikings hat (turn a square in purple and gold), a Chunkeanie, maybe a pair of these crazy-looking Cozy Mittens (the construction looks neat) -- and one that will be a real stretch, a Big Lebowski-inspired cardigan for Paul. There are still gifts to buy and wrap, cookies to bake, and decorating to finish, but we're enjoying the season and doing things like the St. Lucia festival at the Swedish American Museum, the holiday El train, and relaxing by the lights of the Christmas tree. 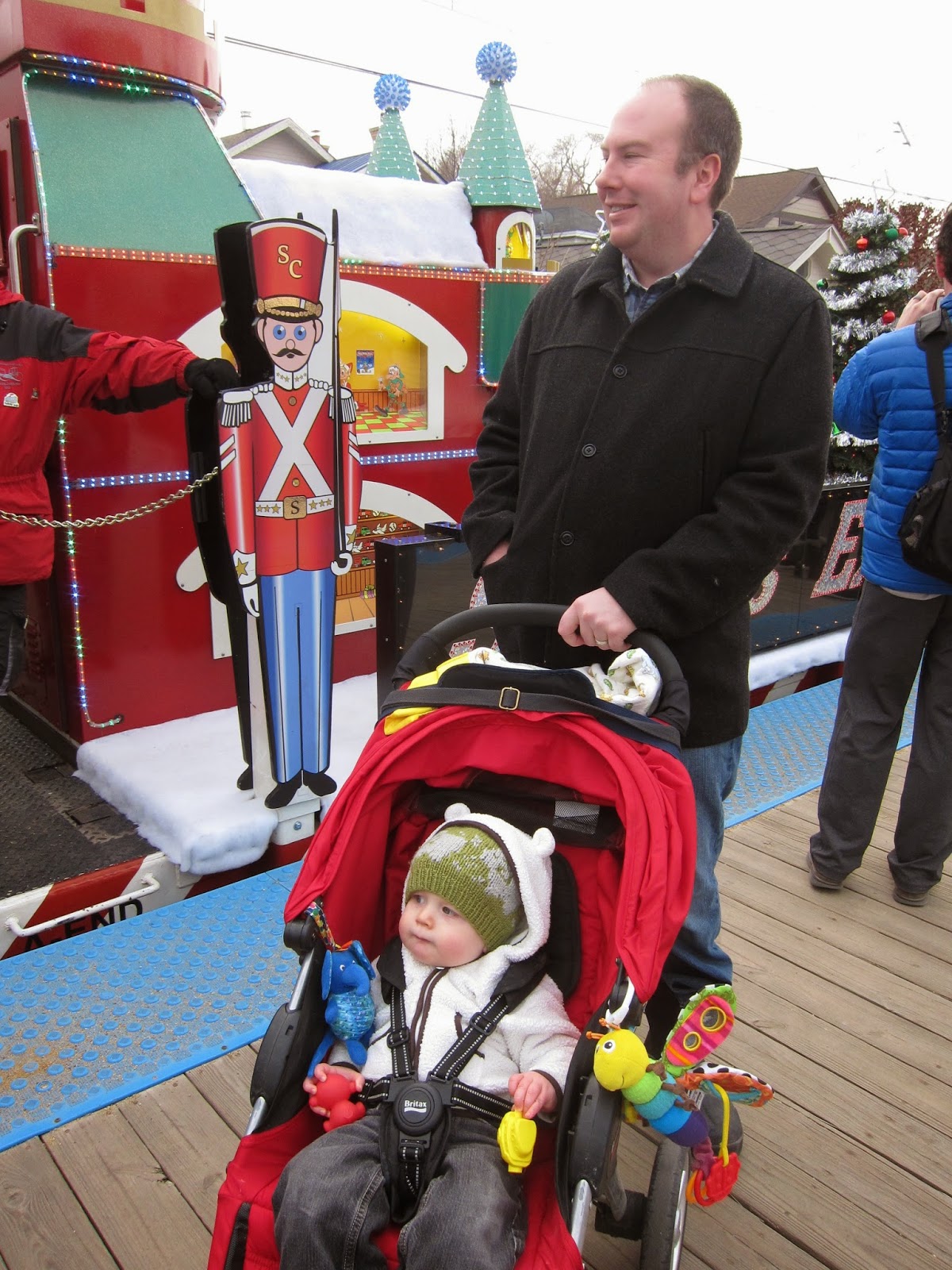 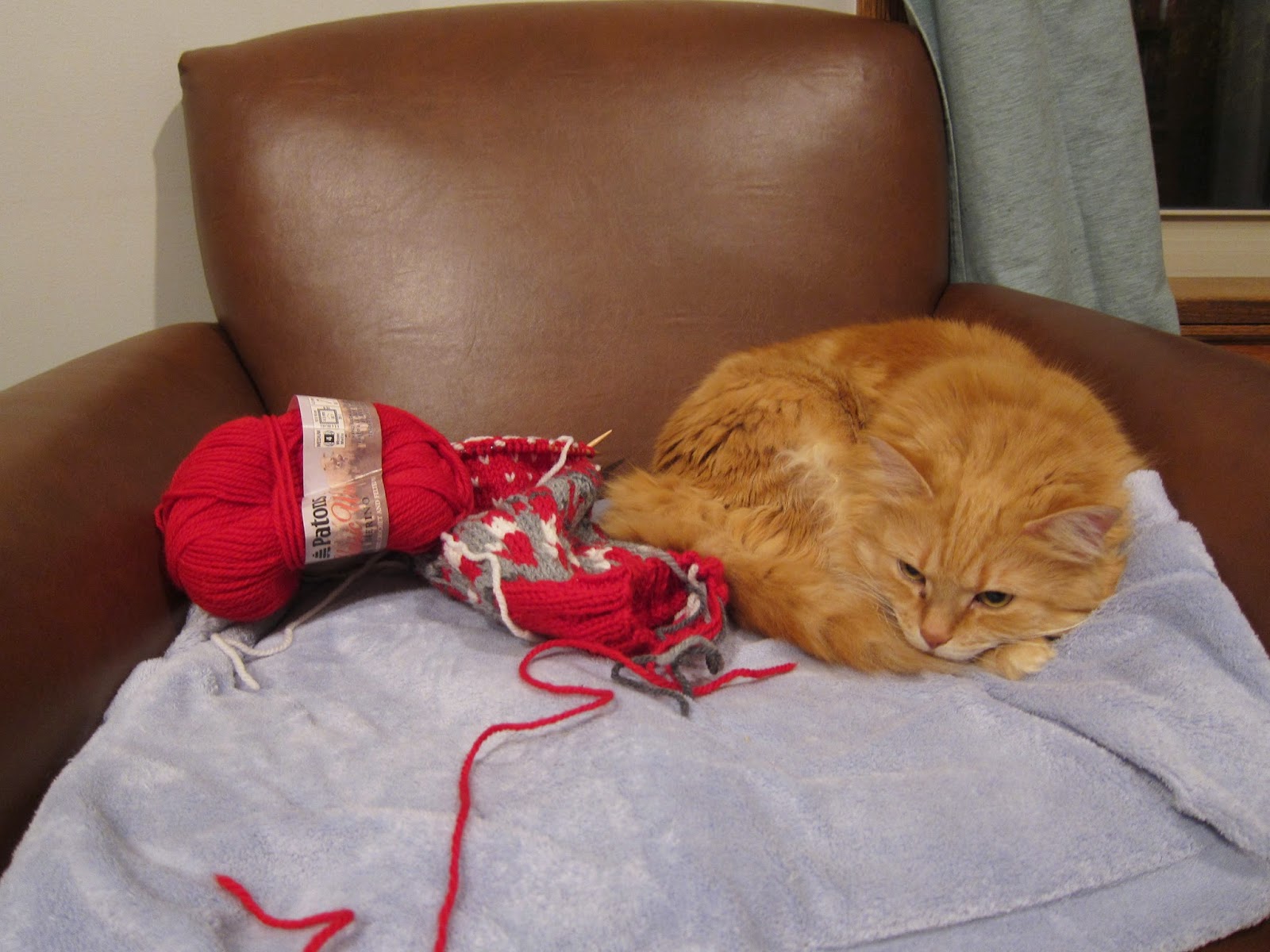 I've been a busy little elf with the gift knitting lately. Somehow my knitting productivity has increased dramatically -- I credit the decreased sunlight and chilly temperatures. Cuddling up with a cat, some tea, and my knitting seems like the perfect activity. 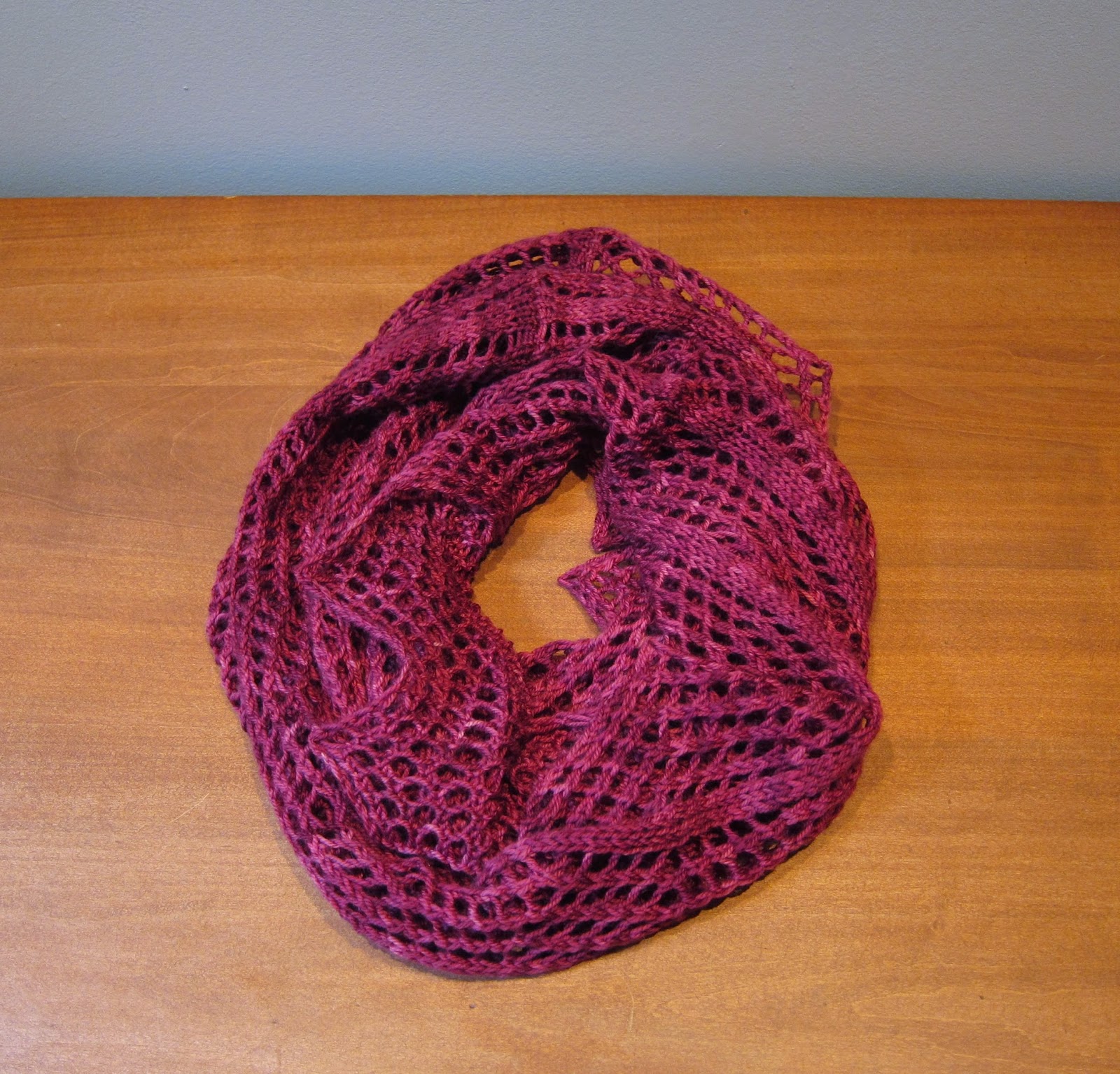 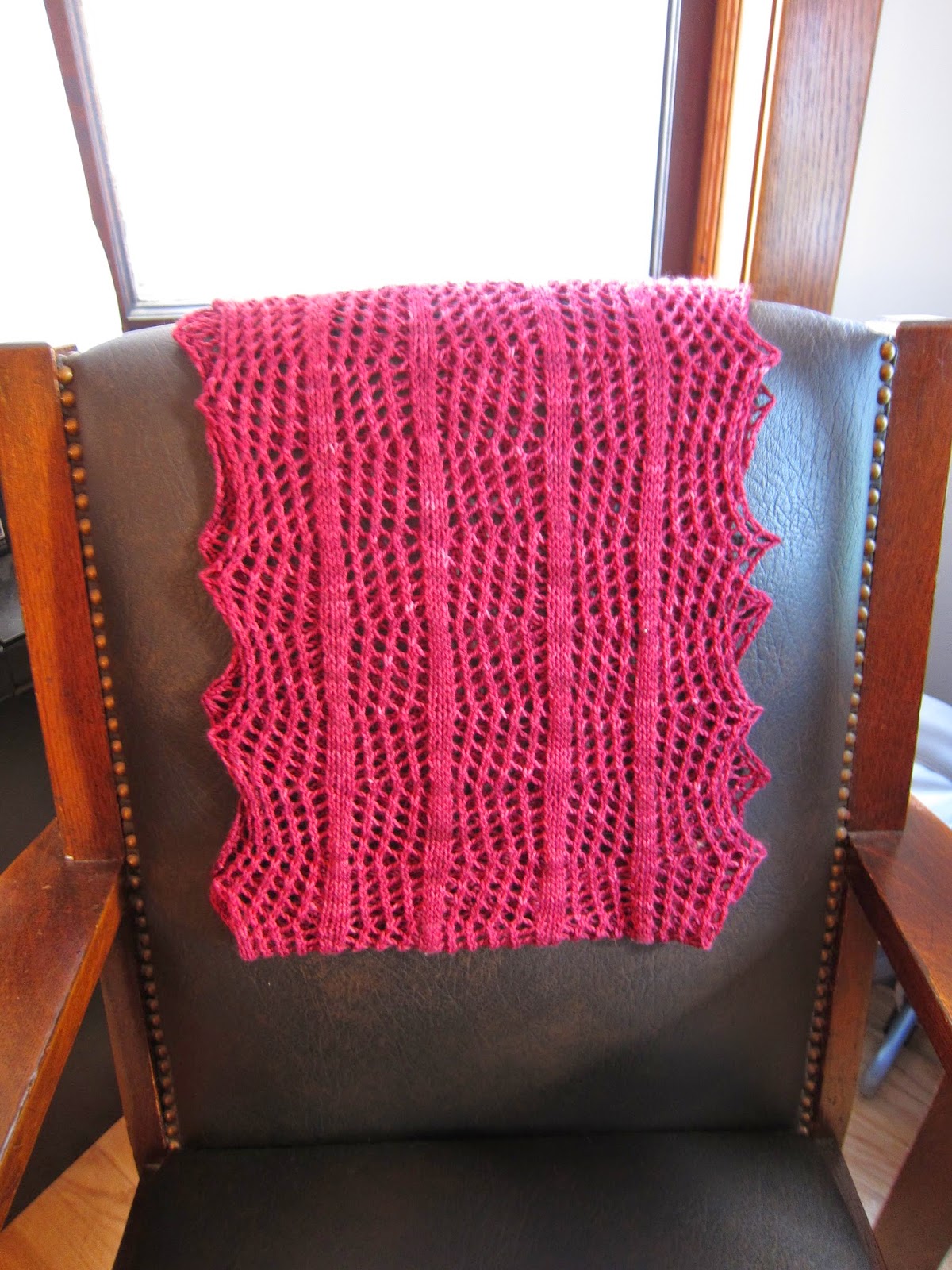 notes:
Brilliant pattern -- very easy lace, it made for perfect travel knitting while we were in Door County last month. You're essentially just knitting a scarf, then seaming the ends together. Next time I would use a provisional cast-on, then work a three-needle bind-off. The yarn is soft and squooshy, and I love the color. This is a birthday gift for my mother-in-law, though I'd really like to keep it for myself. Confessions of a selfish knitter!

Happy Thanksgiving to you and yours
Posted by Jodi at 6:00 AM 4 comments: 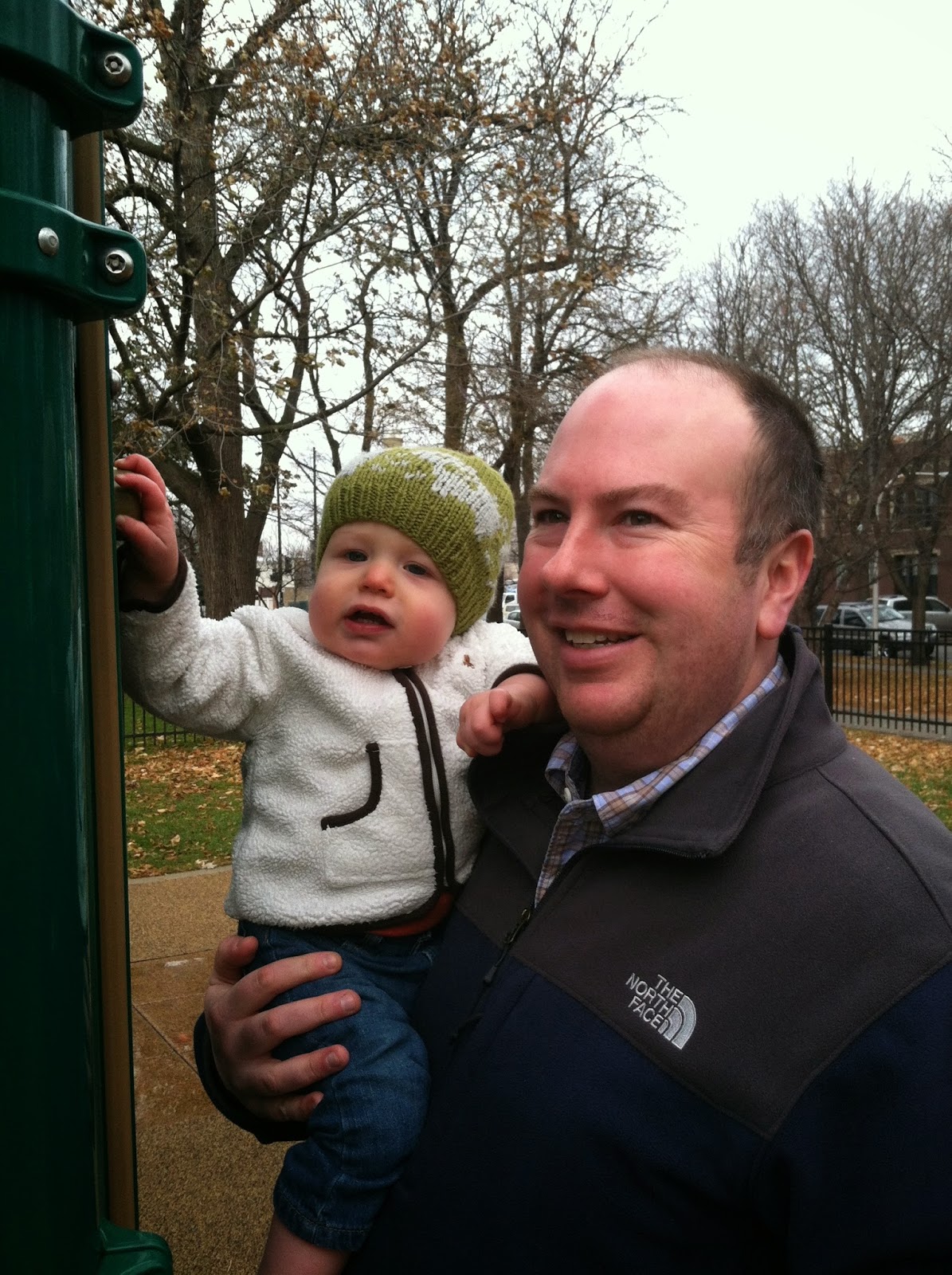 Erik is sporting a new handknit hat these days. It is going to fit his large head (ninety-fifth percentile!) for approximately five minutes, so I'm not waiting for Christmas for him to wear it.  Stranded colorwork is my knitting bête noire, so I'm glad to finally make some progress. 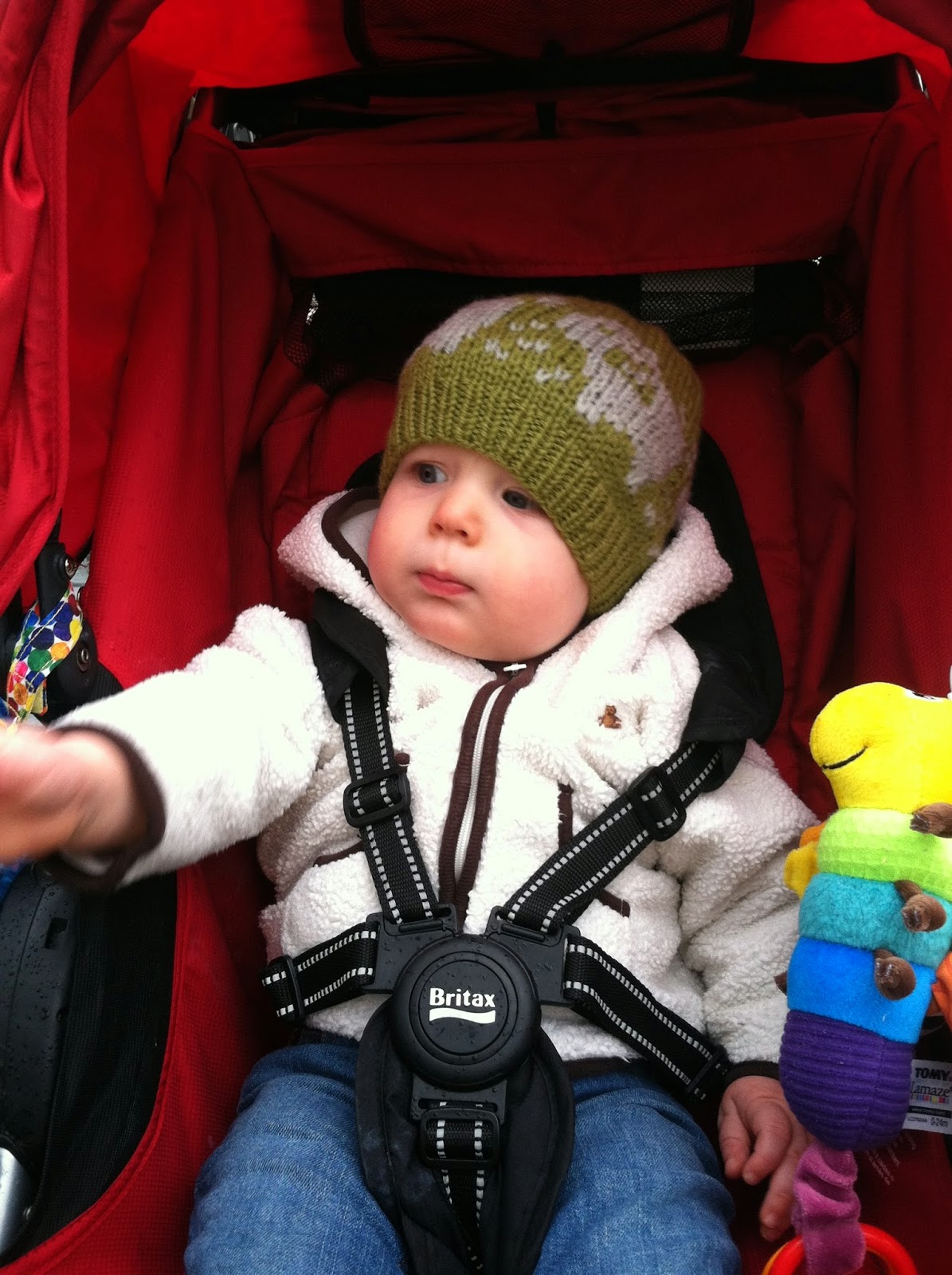 notes:
I was inspired by blanchn's beautiful adaptation of a sock pattern. I love bighorn sheep! I folowed blanchn's notes and cast on 72 stitches, using US 4 needles for the 1x1 ribbing, then I switched to size 7 since I wanted a larger hat. The ribbing's a little tight -- I'd use US 5 next time. I followed her notes other than that, and it turned out super cute. I wish I had used cream yarn for the sheep for more contrast, but Erik hasn't complained. 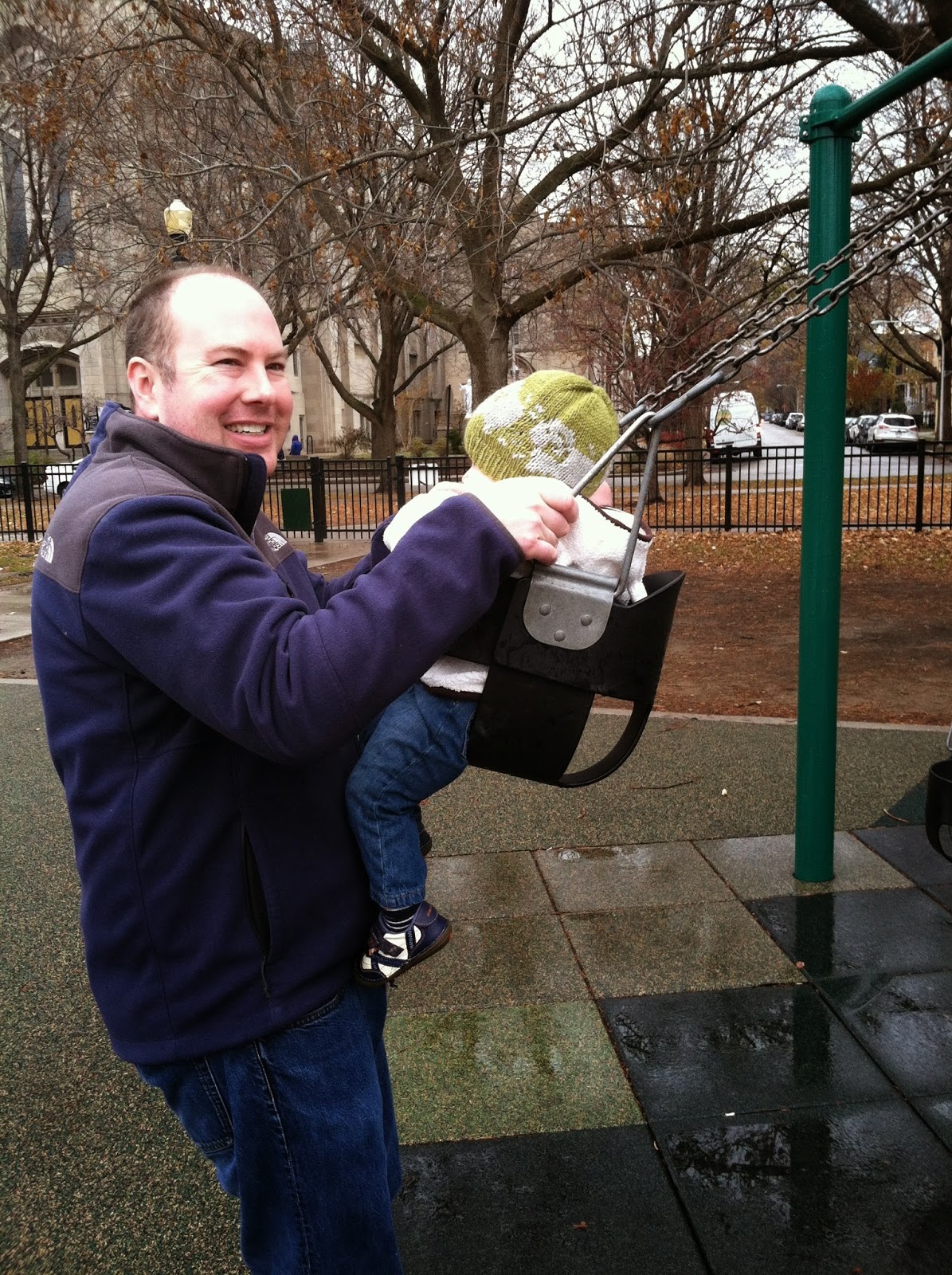 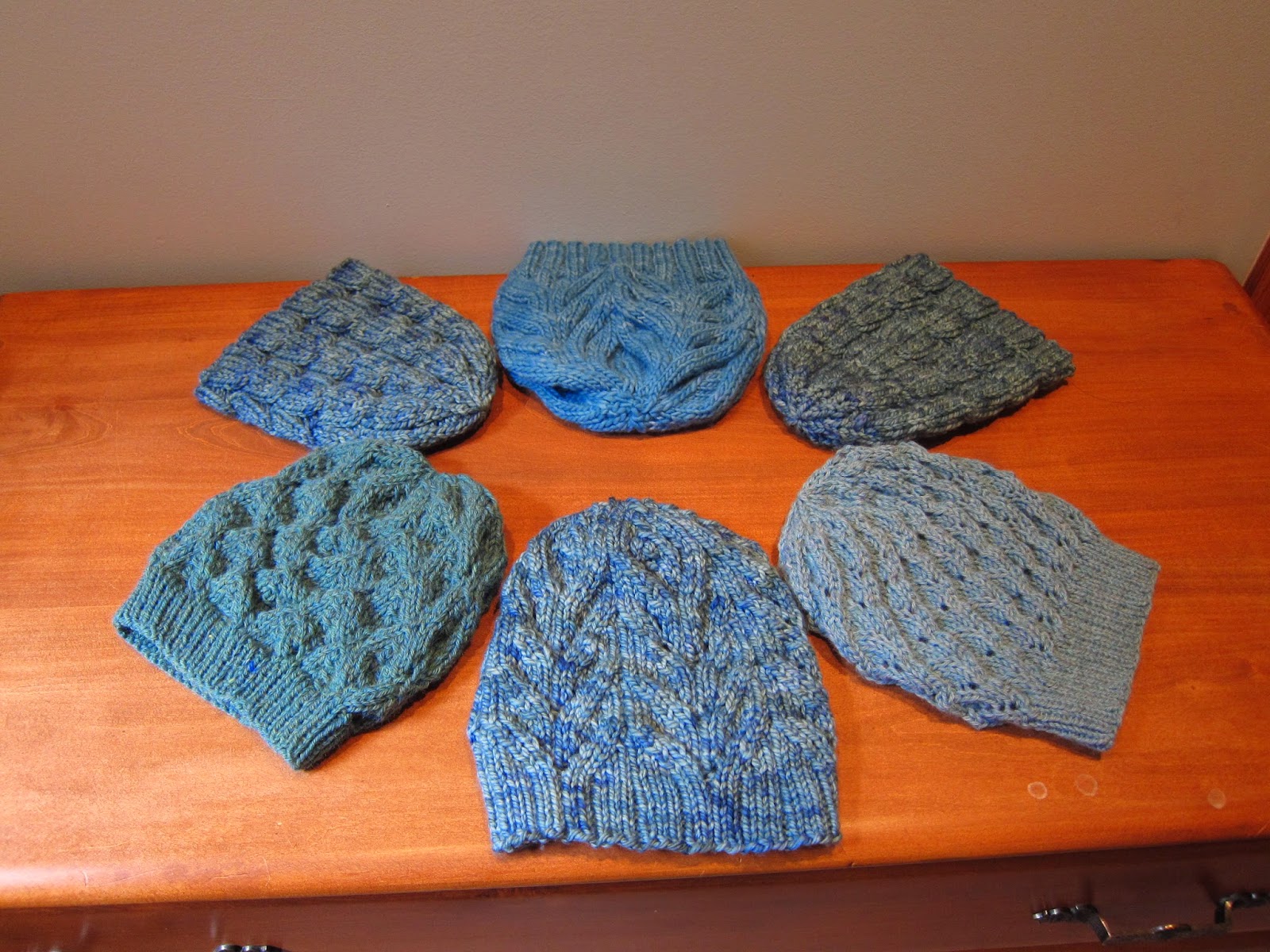 Lots of hats off the needles lately! I've already blogged about the Saint Anthony cable hats and the Milanese lace topper, but new to the collection are Barnwood, Magnolia, and Betsy. 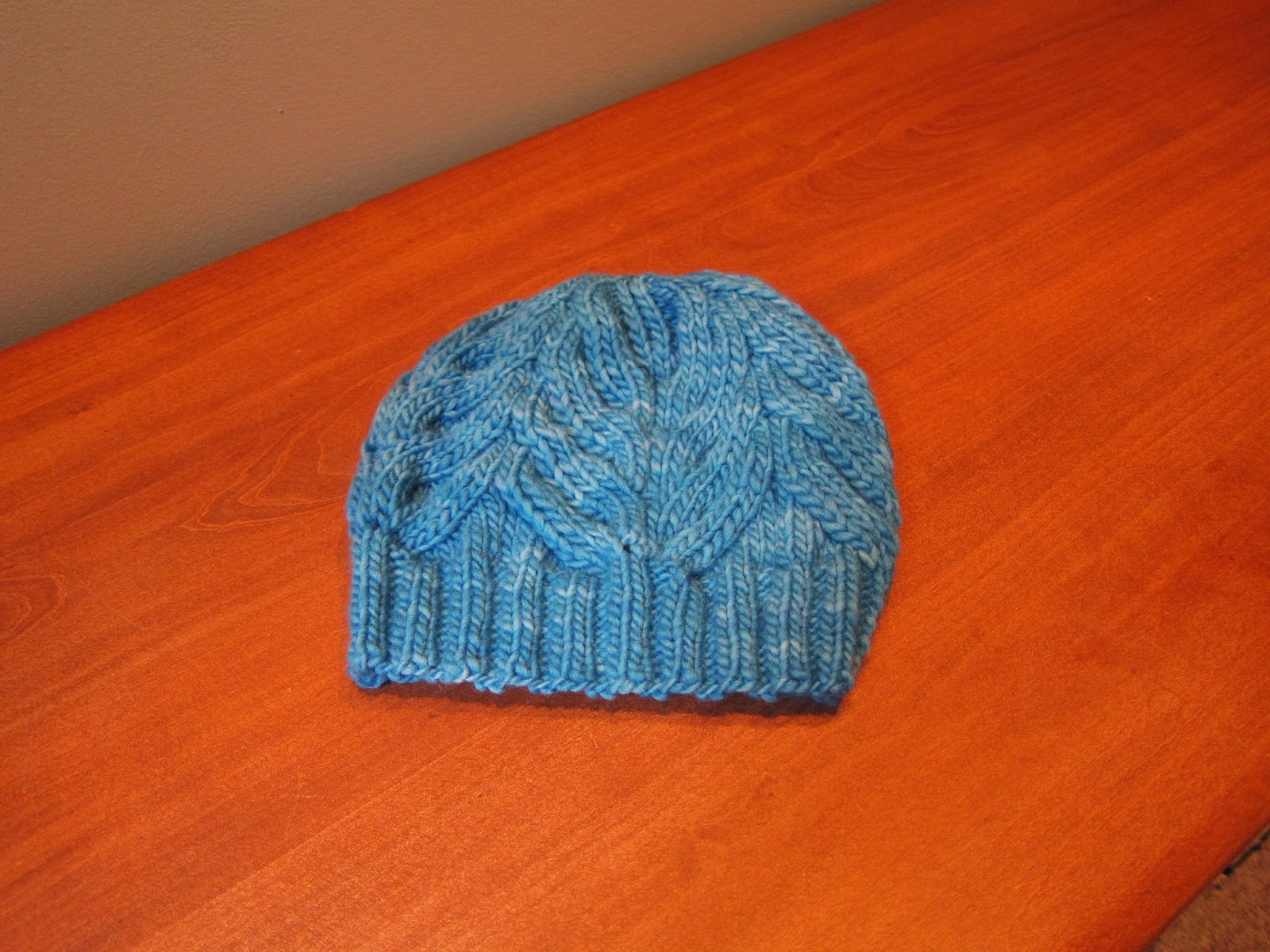 Magnolia (above) and Betsy (below) are essentially the same stitch pattern -- a nice lace pattern that has an almost cabled look. Magnolia is a free pattern for worsted weight yarn, whereas you have to pay for Betsy, which is written for chunky yarn. The crown decreases are very different. I ran out of yarn on Magnolia and had to do some improvising on the decreases, so it's not quite as pretty as it could have been. The perils of stashbusting! The yarn is Malabrigo Worsted in Bobby Blue. 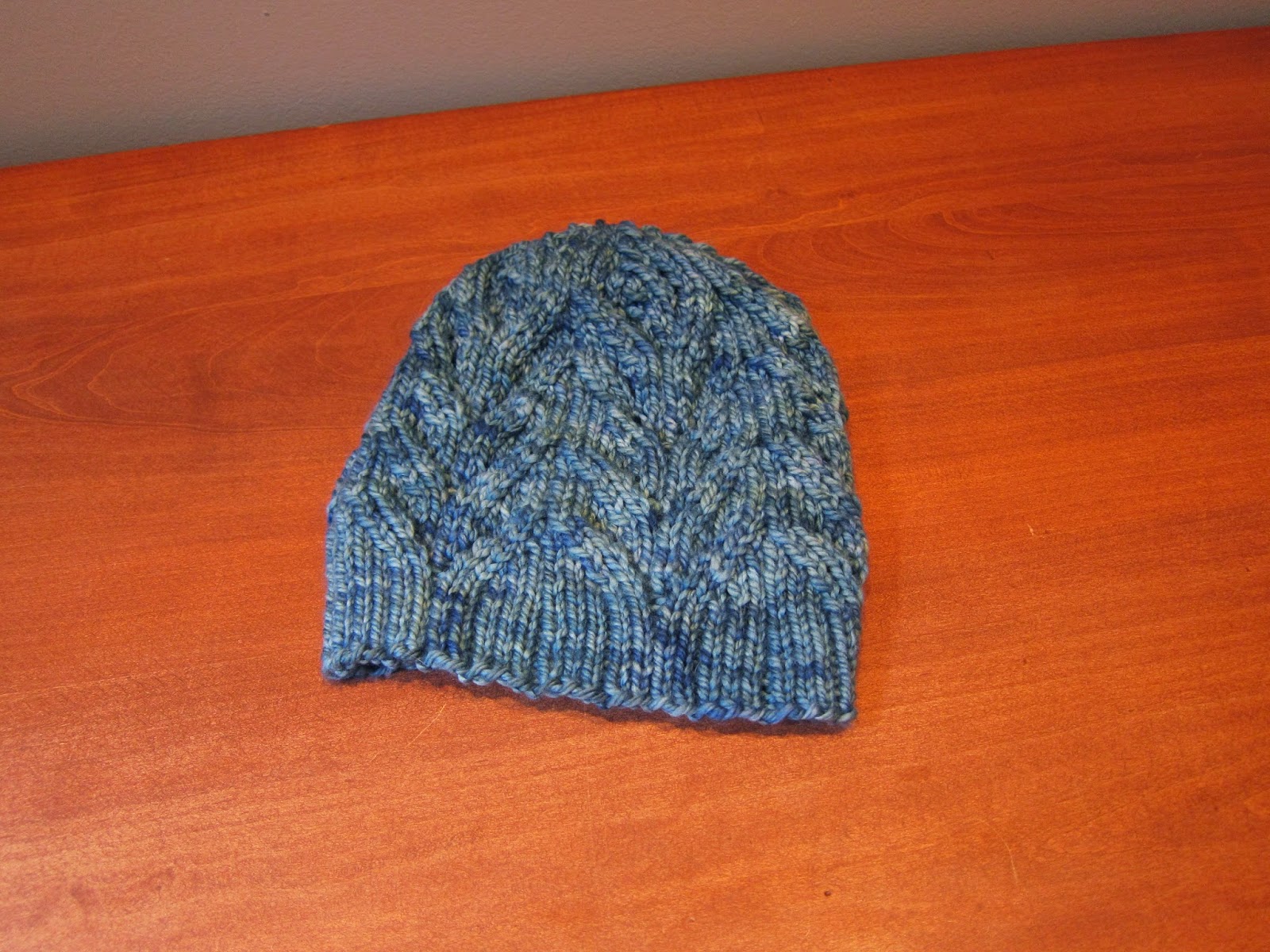 I had plenty of yarn for Betsy (more of the lovely Orange Flower Twist HW yarn that I also used for two Saint Anthony cable hats), so I followed the pattern as written. Barnwood still needs to be blocked, so full details another time.
Posted by Jodi at 3:19 PM 5 comments:

the mercury is falling...

and the handknits are emerging! I've been knitting like a fiend as of late. Not only have I been using yarn from the stash, I've been rocking the free hat patterns. 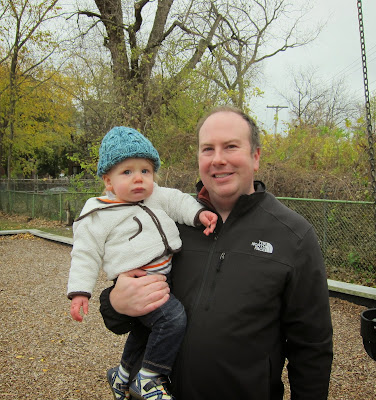 I've made a couple of these Saint Anthony Cable Hats in the past month or so. Erik's sporting an adult-sized hat with the brim rolled up. Honestly, I was hoping to wear it for a modeled shot, but it ended up being a chilly morning at the park. Handknits to the rescue!

notes:
I liked the pattern so much that I made a second one right away. The first hat I worked per the directions. With the second one, I used size 8 needles for the first 7 rows, then went up to size 10. I wanted the hat to be just a touch longer, so I added an extra row of ribbing to each pattern repeat. Worked like a charm. The yarn is a dream to knit -- soft, squishy, beautiful colors. Naturally, it has been discontinued. Sigh! 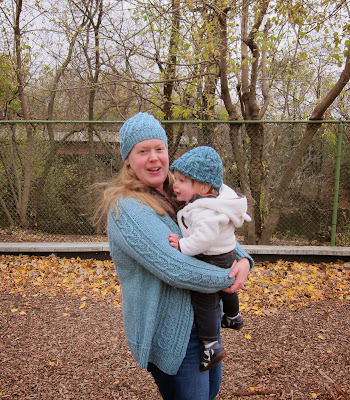 Goofing off at the playground. I'm wearing not only my Aidez cardigan, but also another new hat.

notes:
This color must speak to me, since it's the same hue as my Aidez (which is knit from Eco Wool). The pattern was fun and easy. I squirreled up the decreases at the top a bit with an extra stitch somewhere, but it looks just fine nevertheless. I suspect that the designer was using British needle sizing, so I used US size 4 for the ribbing and switched to US 7 needles for the rest of it. I continued the 1x1 ribbing for the first 14 rows, since I didn't like how the stockinette section rolled on so many versions on Ravelry. 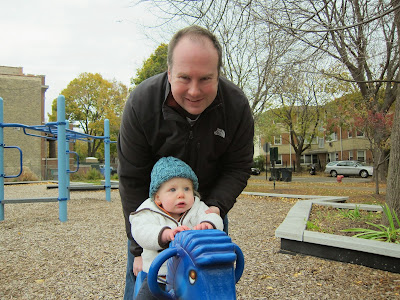 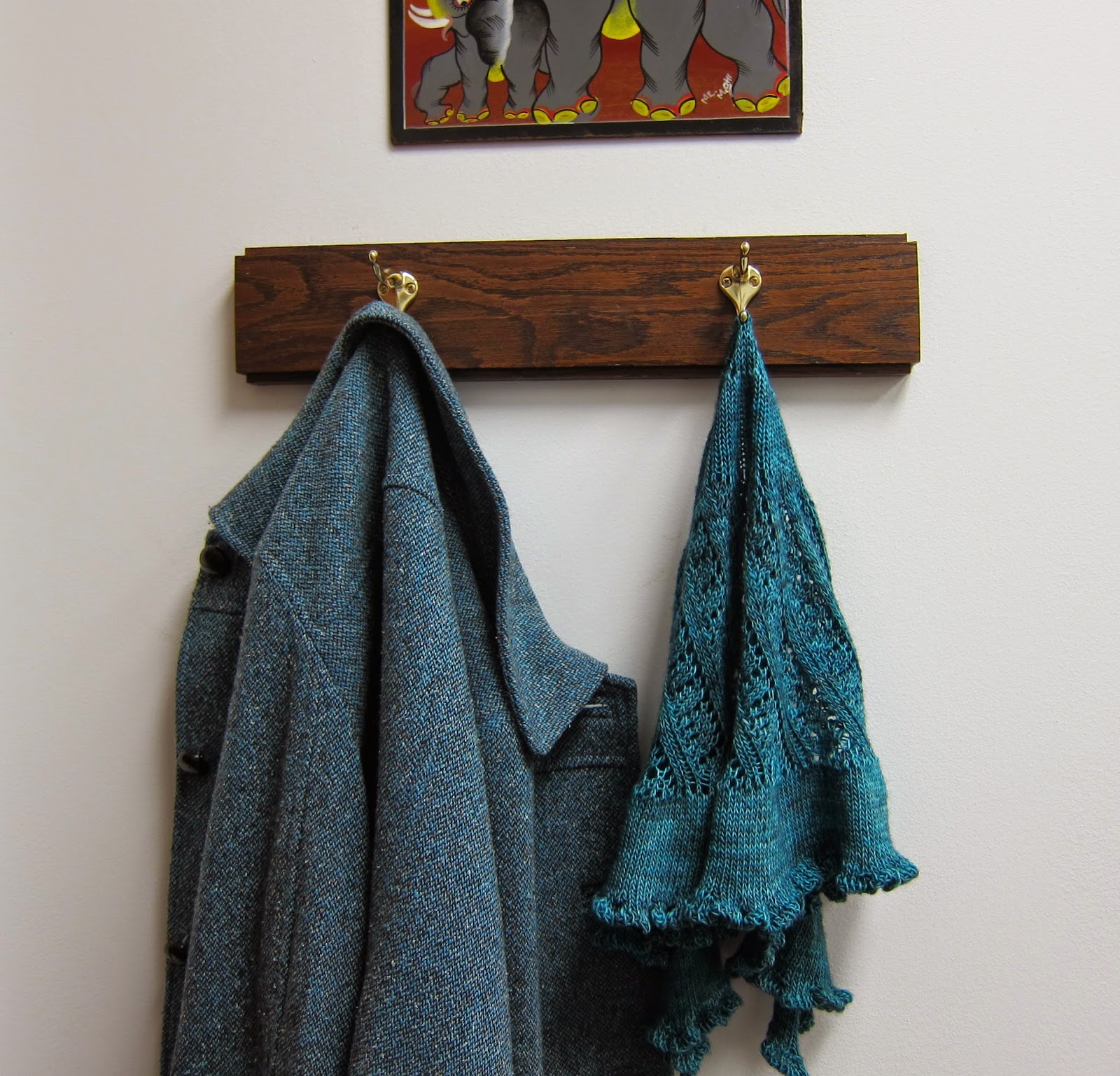 When I saw a sample of the shattered sun shawl at Windy Knitty (my favorite Chicago yarn store), I just had to make it. Immediately. I bought the yarn that night and cast on right away. Lo and behold, a finished shawl! This is really unusual for me. I tend to dither about what to knit, and yarn marinates in the stash for a good while. The experience was refreshing, and I love the shawlette. 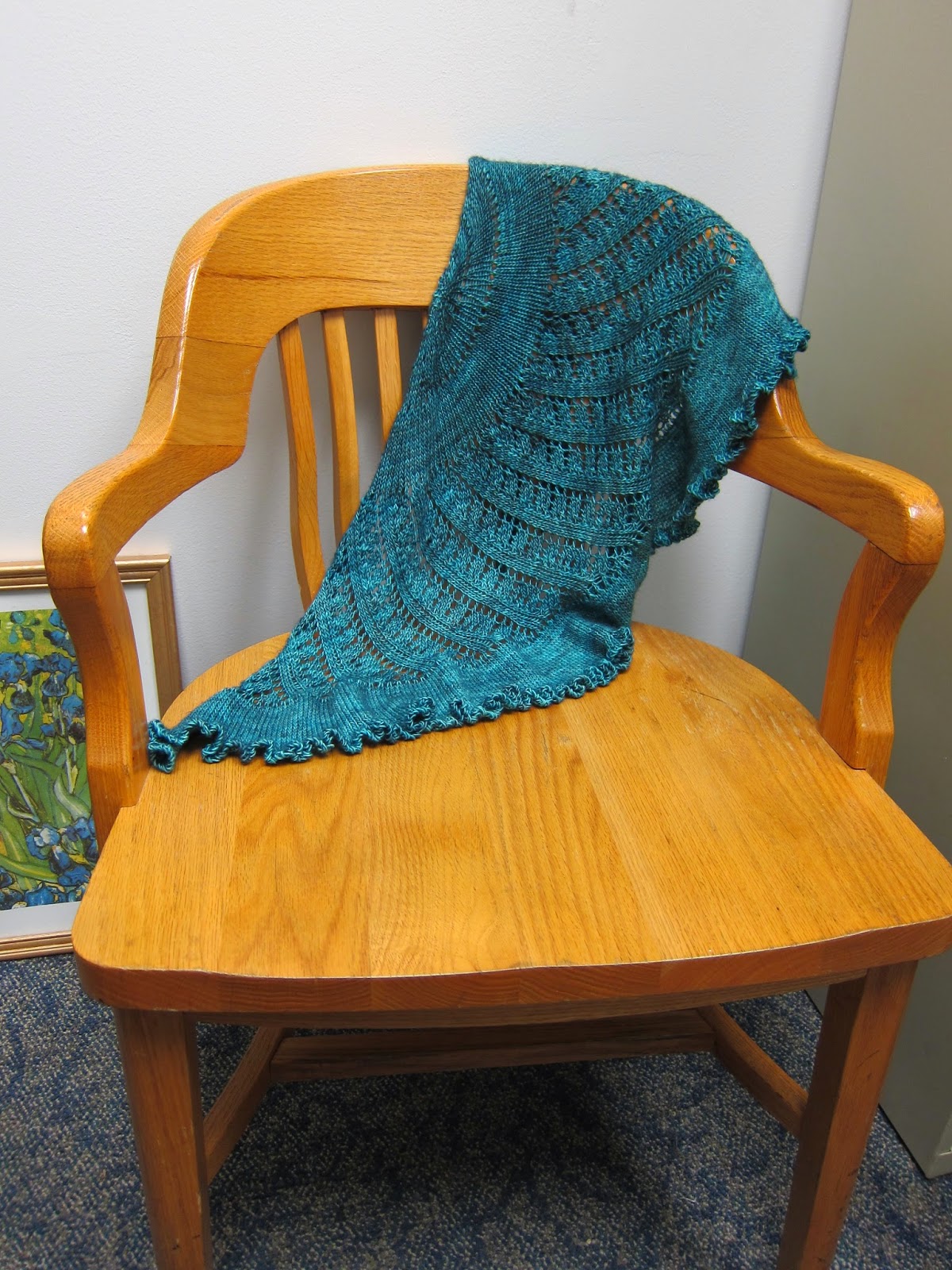 notes:
Tosh merino light is incredibly soft and cozy. Yes, it will pill, but it's like butter to knit, and it's wonderful to wrap around your neck. Unlike my last Madelinetosh yarn experience, this skein had just one break/knot. The pattern is well-written. My only complaint is that I don't love the ruffle and the bind-off, but that's minor and merely a personal preference. I had a little yarn to spare at the end, but not much. 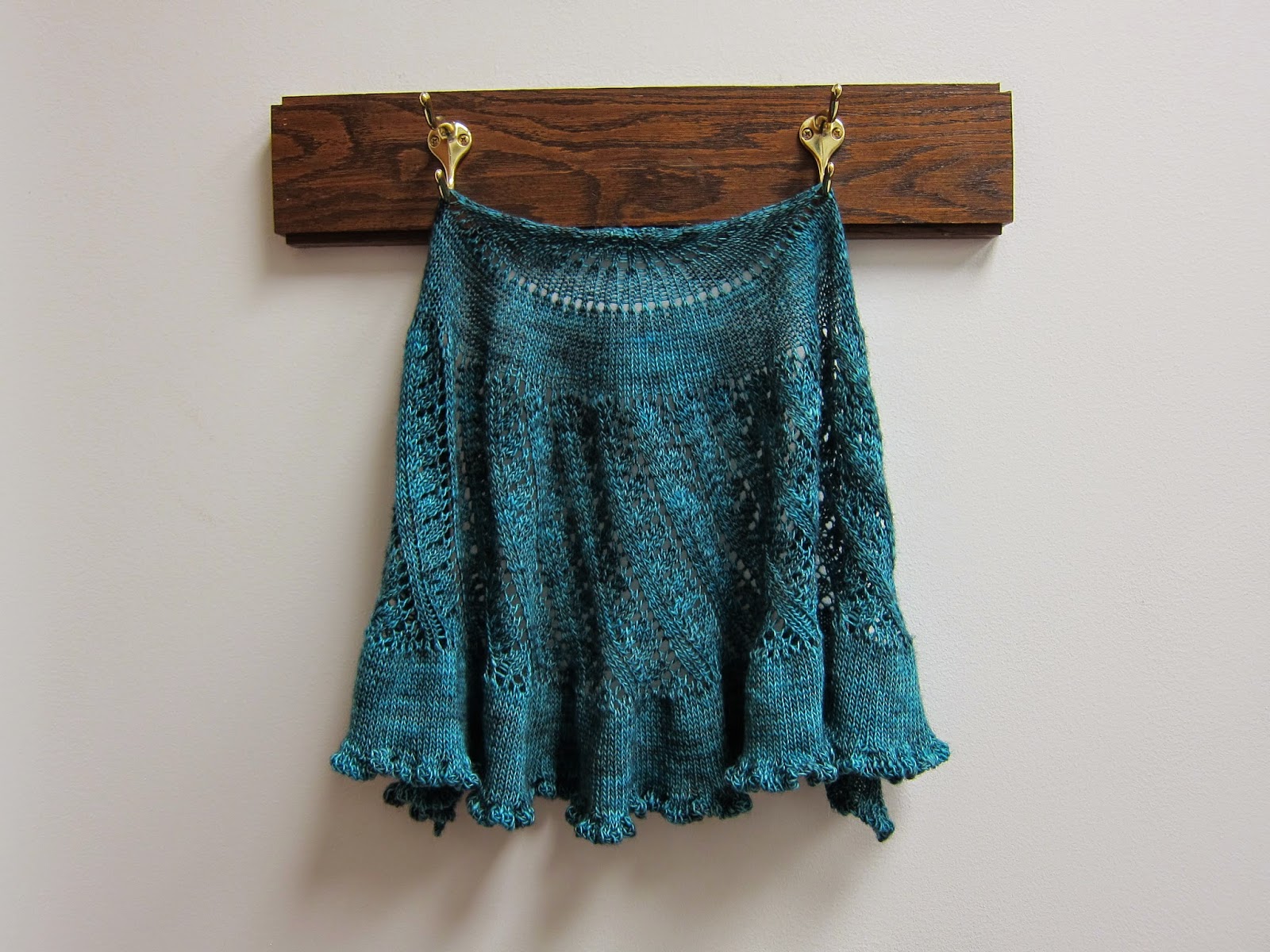 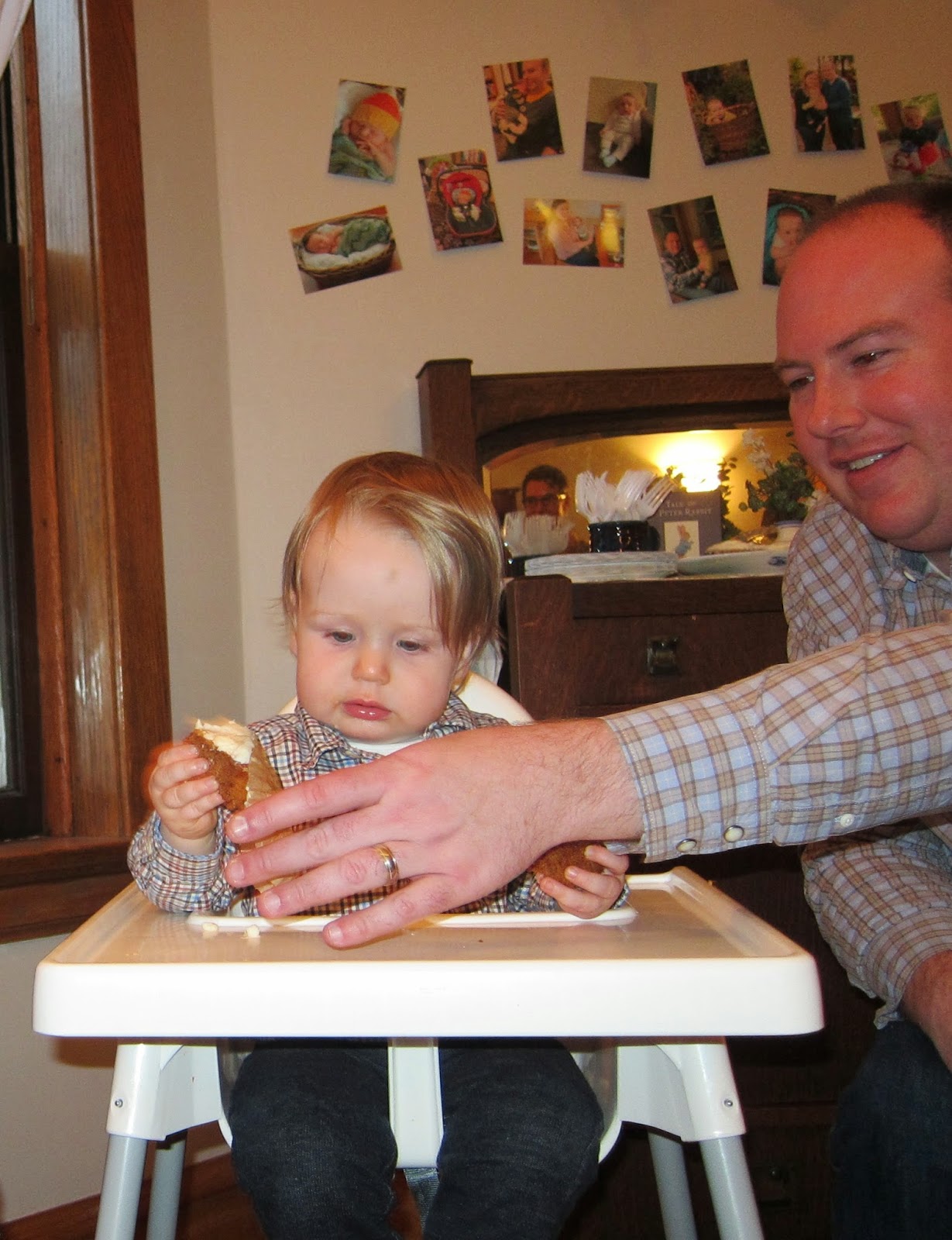 How quickly a year passes... Erik turned one, and we celebrated Peter Rabbit-style. How I love this sweet, funny boy of ours. 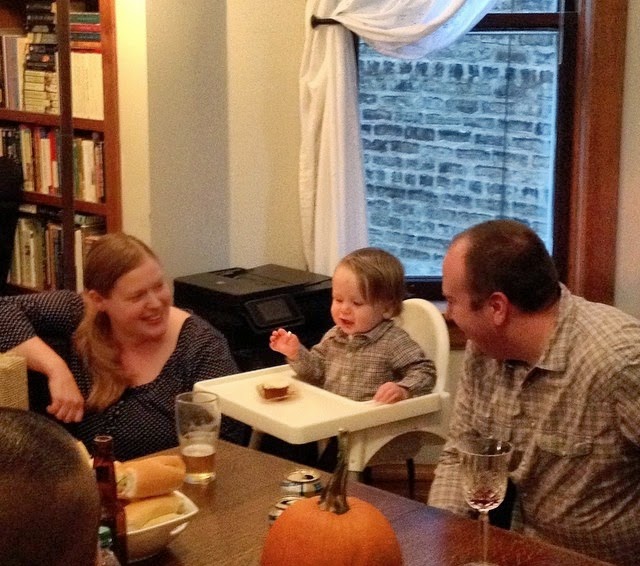 Carrot cake, which Erik loved. He didn't know what to do at first, but then just about polished off his whole cupcake (though a good number of crumbs bedecked his high chair afterward). 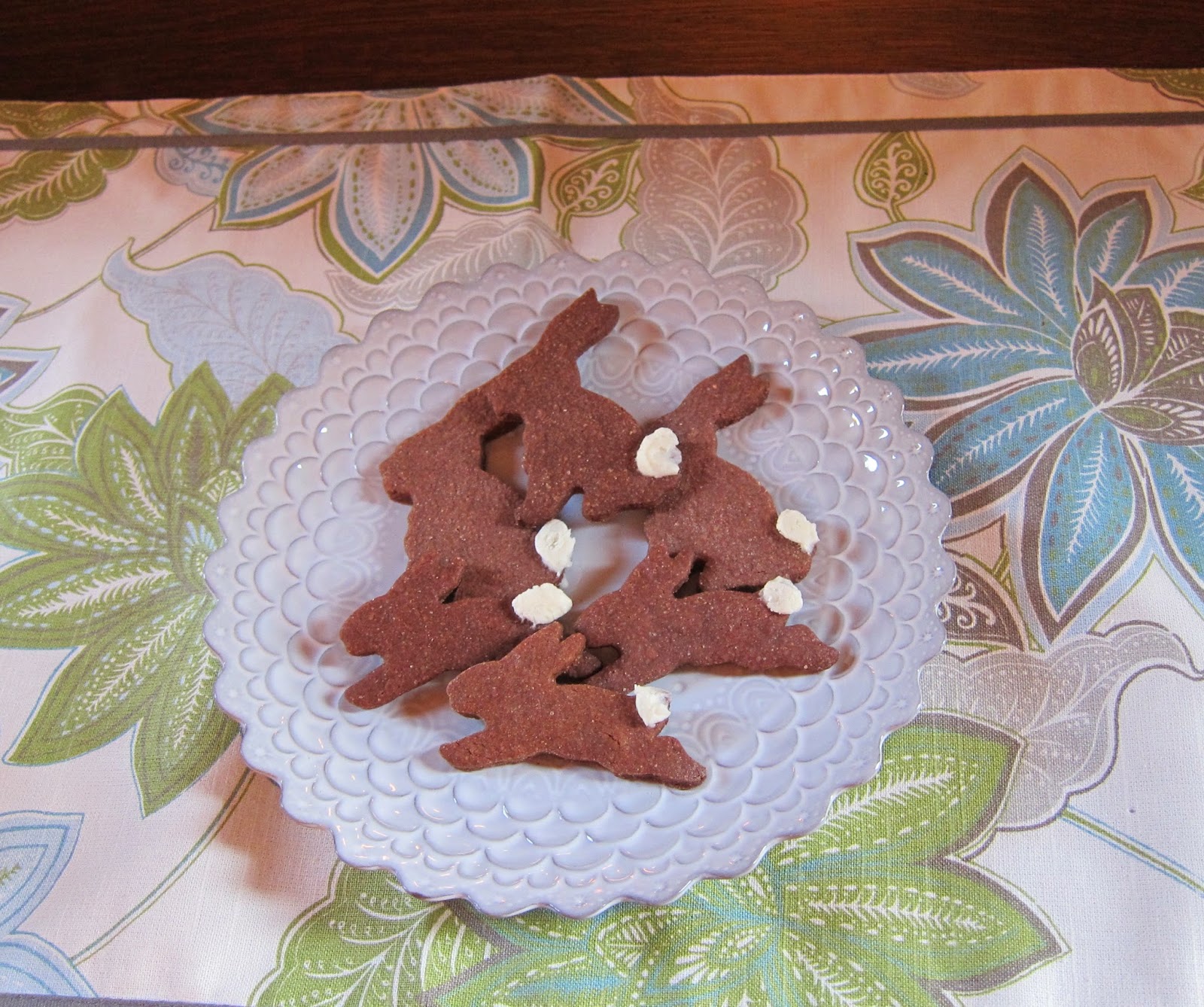