Let's move that grumpy post down a notch! Things are looking up around here.

Turns out that I'm not the only one around these parts who likes the heating pad. I got up for just a minute and returned to find this scene. 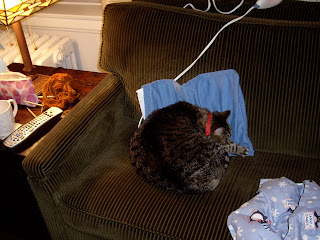 Oh Kylie... That little spot of pumpkiny orange in the top left managed to turn into yet another scarf, practically overnight. Also, in the process I learned that I can watch Bones, just not in HD! In HD it's way too gross for me, and I have to cover my eyes for half the show. 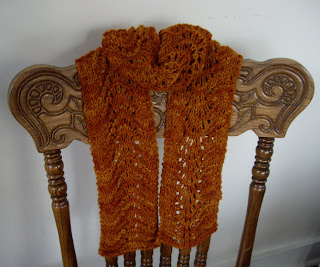 Pattern: Easy Lace Scarf (here)
Yarn: The Plucky Knitter Aran Cashmere, Pumpkin Latte, 2 skeins
Needles: US 9 bamboo straights
Notes: Easy pattern -- I always love feather and fan. This is a skinny scarf, which worked out great for the small amount of yardage I had. The yarn is absolutely scrumptious -- so soft and cozy, the plies aren't splitty at all, and the colors are deep and lovely. Perfect for autumn!
Posted by Jodi at 4:08 PM No comments:

Another dismal, grey, rainy day here in Chicago. A few spots of cheer, though: 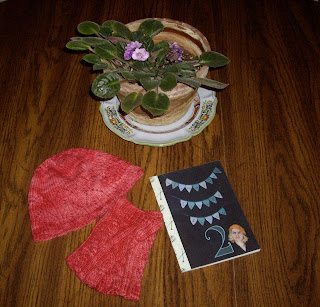 My Windy City Hat and Irish Hiking Wristwarmers finally saw their trial run, and Ysolda's new book arrived in today's post. My handknits kept me warm and cozy but didn't succeed fully in cheering me up. When I met one of my university friends outside the (dreadful) library today, I told her she was witnessing me at my most cantankerous. She laughed and laughed...

Oh well, not every day can be full of rainbows and unicorns, I suppose.

Then again, I do live in Boystown, where every street corner is bedecked with giant rainbow-striped pylons: 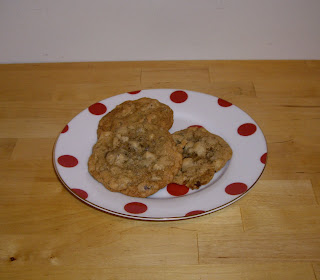 Not the best looking cookies, but they taste pretty great even though I substituted vanilla extract for maple extract. My kitchen is well-stocked, but not that well-stocked. The maple extract would definitely kick up the flavor another couple notches.
OK, off to fix another cup of tea (Candy Cane Lane, best holiday tea ever), down a couple Aleve, and bust out the heating pad. Have you ever read the warning label on a heating pad? Apparently you're not supposed to use it in any way that would actually benefit you at all. I blame the lawyers. Hear that, Paul? ;-)
Posted by Jodi at 4:05 PM No comments:

Socktober? I must have meant Scarftober!

Scarftober doesn't have quite the same ring, but apparently that's what October turned into around here. 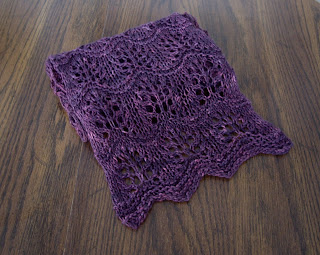 A scarf pattern by Ysolda that isn't terribly popular. How can that possibly be?!?!? It's even free! 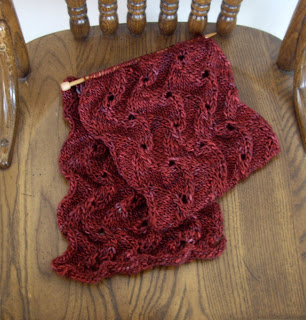 It's the Ariel Scarf, and I cast on 42 stitches to make it just a bit wider. The lace pattern's almost sculptural -- I love all the texture. I'm using Sundara Aran Silky Merino in Ruby Port for this, and it's already bleeding like a mofo. My hands are red when I finish knitting, and I can see the dye swirling down the bathroom sink as I wash my hands. My bamboo needles are now red. I'll have to try adding vinegar to the wash water; I'm a bit anxious about it, especially since Sundara yarn is so darn expensive and difficult to acquire. Sigh...
----------------------------
getting ready for the big show... 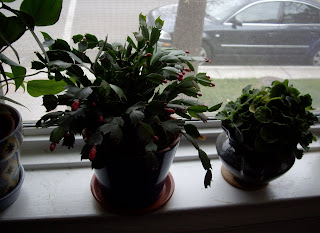 I'm considering knitting a Modern Garden cardigan for my mother for Christmas (ravelry details here). Mom has lost a lot of weight in the past year due to health problems, and this looks like it would keep her warm and cozy. As an added bonus, it would not take too long to knit! Double-stranded Eco Wool + size 15 needles. :-)

I had thought about knitting an o w l s sweater for her, but trying to guess about the waist shaping sounded like a recipe for disaster, plus it may be too twee for her.
Posted by Jodi at 1:14 PM No comments:

Anyone else remember this movie from the 80s?

It was absolutely terrible. You can tell this by just a quick plot synopsis: local teens breakdance to save the community center from a local developer who wants to build a mall. Further evidence of its crappiness is that I misremembered the teens as breakdancing to save the mall. Wow... 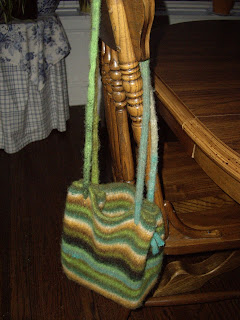 Pattern: Booga Bag, by Julie Anderson
Yarn: Noro Kureyon (#164?), 3 skeins
Needles: Clover US 10.5 16" circs and DPNs
Notes:
Next time I'd use Chris's great idea and braid 3 i-cords together to make sturdier handles. I didn't have any extra Kureyon, though, so no dice this time. This would make a very cute and handy project bag to take to knitting night. I'm still not entirely sure about felted bags, but there are a couple more patterns that are intriguing: 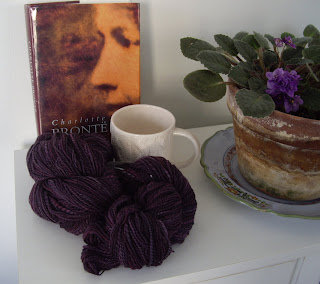 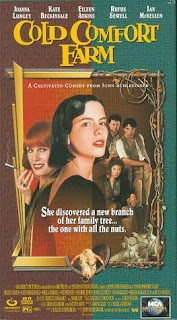 One of my favorite moments in Cold Comfort Farm comes when Stephen Fry, in the role of Bloomsbury-type intellectual (and doubtless D. H. Lawrence enthusiast) Mr. Mybug, poses the question to Flora Poste, "Do you believe that women have souls?" He later contends that Branwell Bronte wrote Wuthering Heights. ;-) Both the book and film are fantastic.

My little bookworm, curled up with The Mountains of California: 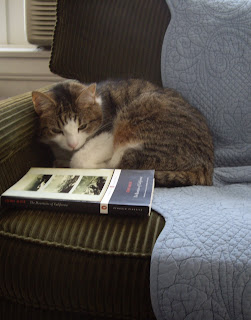 I think she was inspired by the all the bits about John Muir in the first episode of Ken Burns' National Parks PBS miniseries. Apparently Muir used to bend over and look through his knees to contemplate the "upness" of mountains:

Come to the woods, for here is rest. There is no repose like that of the green deep woods. Here grow the wallflower and the violet. The squirrel will come and sit upon your knee, the logcock will wake you in the morning. Sleep in forgetfulness of all ill. Of all the upness accessible to mortals, there is no upness comparable to the mountains.