Yikes, it must look as if all I do is knit shawlettes! This one I actually knit back in November and December of 2009, but couldn't share until now as it is a gift for someone familiar with ye olde blog. 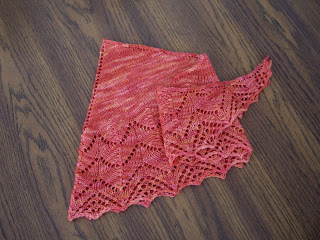 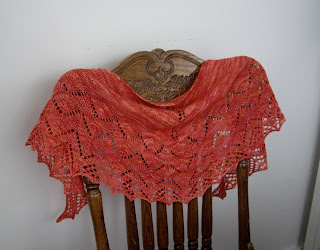 Notes:
Easy, pretty pattern, and definitely a quick knit. I had lots of yarn left over. Next time I’d add one more repeat of the the first lace pattern.

The Plucky Knitter’s MCN is always a joy to knit – it’s soft, springy, luminous, and just plain wonderful. The color’s a little bright for me, but it should please the recipient and most definitely provide a cheery touch of color on a bleak winter day. 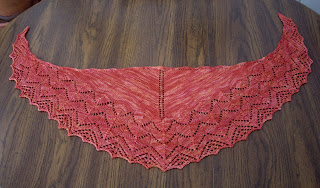 It's winter, so I'm on a soup kick again! 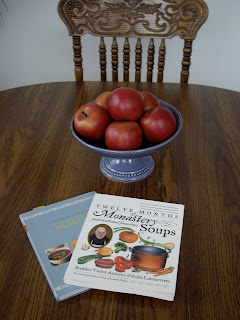 The Cook's Encyclopedia of Soup is one of my favorite cookbooks, and it's a true treasure trove of all sorts of soup recipes. The Carrot and Coriander Soup is in my regular rotation.

Twelve Months of Monastery Soups is new to my kitchen bookcase, and I'm dying to try some recipes. That said, this books has a special appeal aside from the soup recipes themselves.

Brother Victor-Antoine d'Avila-Latourrette is a Benedictine monk at a monastery in upstate New York, and his book definitely reflects this. The illustrations look like reprints of medieval-style woodcuts, and the ink is an unusual dark brown. A very unique aesthetic for a cookbook!

While I'm not a terribly religious person myself, I'm intrigued by the traditions of monastic life and dedication to a life of service. Plus The Name of the Rose is one of my favorite novels, and I watched those Brother Cadfael mysteries on PBS back in the day. So I'll keep you posted as to how the recipes are.
Posted by Jodi at 8:54 AM 1 comment:

It's funny. All you have to do is say something nobody understands and they'll do practically anything you want them to.

~ Holden Caulfield, The Catcher in the Rye

ETA: from the Onion...
Bunch of Phonies Mourn J.D. Salinger 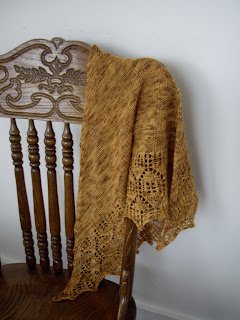 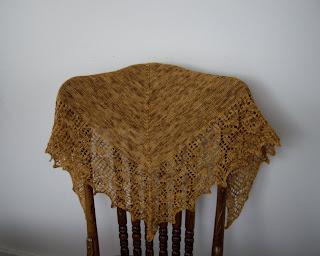 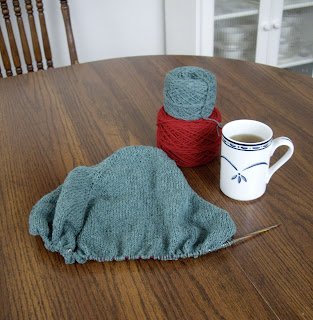 Wandering the Moor #2 is already in progress. This time I'm using Elsebeth Lavold Silky Wool in Verdigris, an absolutely lovely shade of blue-green. While I love Silky Wool for its sophisticated, nuanced colors, nubby texture, and crispness, it's a bit hard on my hands and wrists, so I can't do marathon knitting sessions with it. 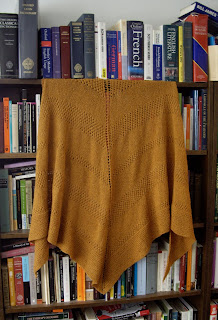 I used Silky Wool for my Textured Shawl last year, and it's holding up beautifully. No pilling, snagging, or growing out of shape. I'm very tempted by Orange Flower's Textured Shawlette to give the pattern another go. While I'm happy with mine, I'd love to follow her modifications and make one that's wider and more scarf-like (hence more versatile).
Posted by Jodi at 12:47 PM No comments:

Saroyan is not only off the needles (which happened back in December), but even off the blocking squares! 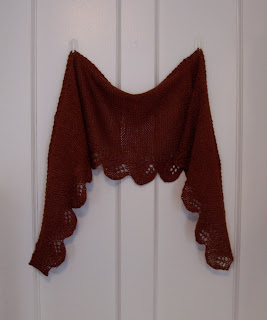 Pattern: Saroyan, by Liz Abinante
Yarn: Elsebeth Lavold Silky Cashmere, cassia (#016)
7 skeins @ 44 yds/skein
Needles: Clover US 8 bamboo circular
Notes:
The pattern's very intuitive and easy to knit; extra kudos that Liz at feministy has offered it gratis. In look it's similar to Alana Dakos' Cedar Leaf Shawlette, but the construction is completely different. I'm not in love with the ends of the piece. They look a little blocky and unfinished. That said, it wasn't at all fiddly to knit, and I most definitely did knit it while watching Bones. How fitting!

The Elsebeth Lavold Silky Cashmere is soft and silky, but the yardage is truly maddening. So many ends to weave in! Also, the woven-in ends are fairly visible. It might be wise to undo the plies of the yarn and weave them in separately, but with so darn many of them, I was less than excited at the prospect. So while the fiber content may be luxurious (55% silk, 45% cashmere), the knitting experience is not. I'm very glad I purchased this at a steep discount or else I'd have been very annoyed.
------------------------------------------ 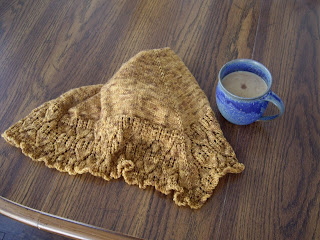 Also off the needles is my first Wandering the Moor shawl. Yes, I enjoyed the pattern so much that I've already cast on for another (we'll save that for another post, though). This one still needs a good blocking. The bind-off was new to me, and I'm not 100% sure I did it correctly -- we'll see how it looks after blocking. It certainly is nice and stretchy.

It appears I'm not alone in my disenchantment with Wuthering Heights! Jane Eyre, though, I do get. :-) 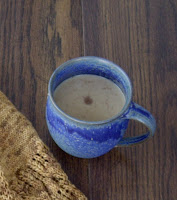 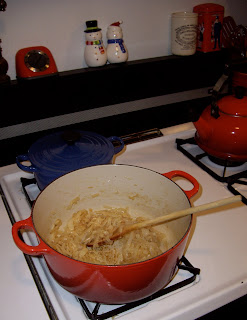 Remember that Seinfeld bit about the milk conundrum at the grocery store? Do you have enough? Should you buy more? I always feel like that about onions. Somehow we end up with way too many. I hate having them go to waste, so the Everyday Food article on caramelized onions was absolutely perfect (same recipe for caramelized onions available for free here). 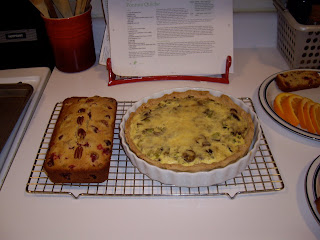 left: Joy the Baker's honey cranberry cornmeal quick bread - yum! This really grows on you. Not too sweet, not too cornmeal-y.

right: oyster mushroom, leek, and fontina quiche (weird pdf link -- not sure where it's from, but it came up in a google search) -- made with half the mushrooms, double the leeks, and gouda instead of fontina. The sheer amount of butter that goes into this recipe is a bit scary, but it's delicious. I followed the crust instructions from the recipe, which I wouldn't do again -- I would use my old standby, Martha Stewart's basic pate brisee pie crust.
------------------------------------------
on the radio

Even if you're not an NPR buff, you'll still most likely enjoy the second half of today's feature on "The Story," where Brad Stoller tells about a rite of passage adventure in Big Sur with his not-so-responsible father. Very funny but also heartfelt.

The bit about Carlos Castaneda and the "gait of power" is especially humorous, even though Castaneda was a huge weirdo.
Posted by Jodi at 11:49 AM No comments: 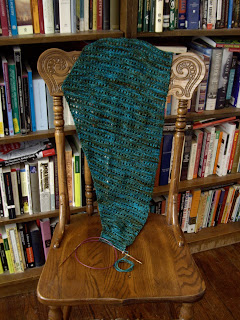 Yikes! I ran out of yarn on my lacy baktus. I weighed my yarn and started my decreases just before the halfway point, I swear. My gauge must have loosened up as I kept knitting, as it was the perfect relaxing project for knitting night at the coffee shop.

More yarn is on the way from the Loopy Ewe... we'll see if it's anywhere near the same colors. Madelinetosh yarn is gorgeous and the colors are almost luminous, but the hand-dyed skeins vary widely between (and even within) batches.
------------------------------------
So what's a girl to do? I cast on for another project for "10 shawls in 2010," of course. This time it's Wandering the Moor, by Celeste Glassel (a Minnesotan!). I'm more likely to wear it while wandering the lakes or perhaps the Mississippi River bluffs rather than the moors, but it's lovely nonetheless. 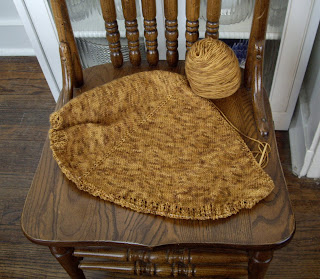 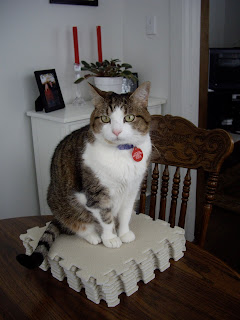 mistress of the blocking squares

P.S. This winter weather combined with way too much time in the kitchen is taking a toll on my hands. Does anyone have any hand cream recommendations? I'm getting desperate. Bonus points if it's a) affordable, b) easy to find/order, or c) easy to stash in my backpack or purse.
Posted by Jodi at 12:34 PM No comments:

Tea and knitting -- what could be a better way to start the new year? 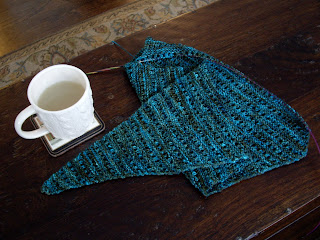 I'm just past the halfway point on a lacy baktus. The yarn is proving impossible to photograph! It's madelinetosh glazed sock in "turquoise." It's a souvenir from my trip to Portland last summer and my meet-up with Sarah (Blue Garter) and Jodi at Knit / Purl. Oh, to be on vacation again!

Taking a break over the holidays really spoiled me. I am now (re-)addicted to sleeping in, drinking copious amounts of tea, and wearing microfleece yoga pants, AKA the coziest garments ever. Follow the link at your peril -- you'll have trouble wearing real trousers ever again.
Posted by Jodi at 3:04 PM No comments:

Phew, this is the most labor-intensive accessory I've ever knit. So many cables, so many bobbles... 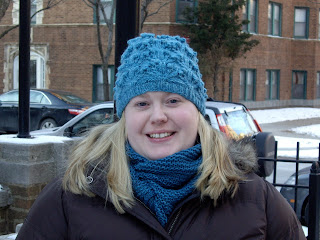 The finished product is cute and kitschy. I had intended to give it to a friend as a belated holiday gift, but I think it's the sort of thing only a knitter would love. So I'm keeping it for myself, and I will get joy out of it despite (because of?) its 1970s bobble-y aesthetic. Plus it coordinates rather nicely with my Manos Mini Shawl (which I tend to wear as a scarf) . 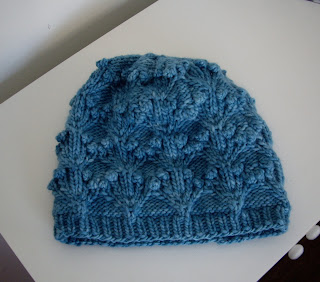 Pattern: orchids & fairy lights, by tinyowlknits
Yarn: Malabrigo Merino Worsted, Bobby Blue, .75 skein
Needles: US 6 - 16" circ for ribbing
US 7 - 16" circ and DPNs for the rest
Notes:
I went down one needle size for the ribbing, which was a good idea.This is a labor of love -- it took about twice as long as a regular aran-weight hat due to all the darn cables and bobbles. This isn't very slouchy on me, but I love it nonetheless! Next time I would cable without a cable needle to speed it up a bit.

The stitch pattern guide has some bizarre errors. C2B, C2F, etc. should indicate holding 1 stitch on the cable needle, not 2 (and likewise knitting/purling 1 stitch, not 2). Otherwise a great pattern, though.