"Life moves pretty fast. If you don't stop and look around once in a while, you could miss it."
Ah, the immortal words of Ferris Bueller.  Busy, busy, busy lately, but I have been knitting.

Paul's Dr. Who scarf is almost done. I'm in the midst of weaving in the ends (yes, my favorite part of any project!). The mercury is still hovering in the 30s F here in Chicago, so he should still get a chance to wear it this season! 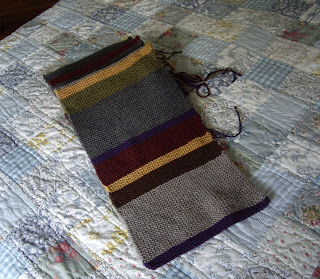 The scarf was a great project for knitting night at the local coffee shop, but not exactly riveting.  It's a loose interpretation of a Dr. Who scarf, as Paul would like to wear it in real life and not look like he's in costume. Hence the colors are a bit muted, and the scarf's not too long (but still a little longer than a regular scarf). Modeled pictures soon, I promise. 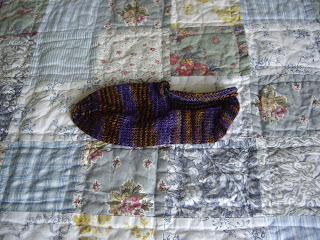 Ah well, I'll still wear them. I'm not joking when I say that Capricha is quite the supermodel. As soon as I start snapping photos of knitting, she comes running and tries to get in on the action: 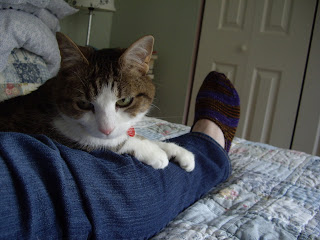 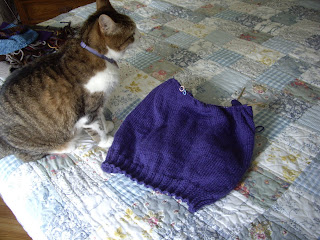 Many thanks to everyone for the input on which cardigan to knit next. I think Aidez is the most "me," but I ended up wanting to use yarn from the stash.

This Rowan Pure Wool DK has been marinating for nearly 5 years -- time to put it to good use! Honestly, it doesn't really feel much nicer than the Knit Picks Swish DK that I use so often. The color might be more complex, but it still has that superwash feel, and every so often a weird fuzzy/fluffy bit pops up. We'll see how it holds up through washing and wearing -- that may be the true test of Rowan vs. Knit Picks quality.
Posted by Jodi at 6:15 PM 10 comments:

march of the ladybugs

Hooray for Friday! I have big weekend plans to watch The Social Network (pretty sure I'll be the last person in the country to see it), make Senegalese carrot soup, brunch at Milk & Honey Cafe, and work on ye olde dissertation (necessary, but not the fun part).
Another green baby gift is off the needles! 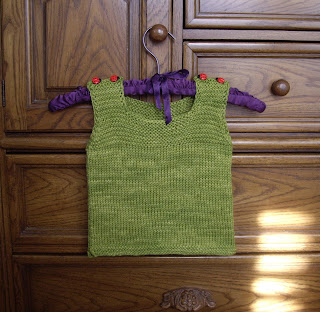 pattern: Colin Vest, by Doris Chang
yarn: Malabrigo Rios, "Lettuce," 1 skein
needles: Clover US 6 bamboo straights
size: 6-12 months
on Ravelry
notes:
I've been wanting to try Malabrigo's superwash Rios yarn for quite some time. The yarn is soft and very pretty, but a bit delicate. Even with blunt-tipped bamboo needles it splits every once in a while. It's much thinner than Malabrigo's regular Merino Worsted, and it seems like a good substitution for Madelinetosh Tosh DK.

I just had a few yards of yarn to spare at the end. More ladybug buttons, once again from JoAnn. I'd knit this pattern again, but I'd modify the pattern to knit the stockinette section in the round.

the knitting of the green 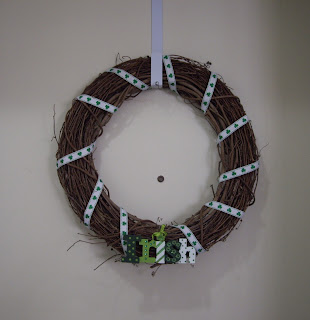 I spent five minutes decorating a wreath in honor of St. Patrick's Day. I suppose I'm not really Irish (though my Viking ancestors kept busy raiding and pillaging the Emerald Isle), but Paul is. Plus in a place like Chicago everyone's a little Irish on St. Paddy's.

Some little green projects are underway for upcoming baby showers! Here's the first one: 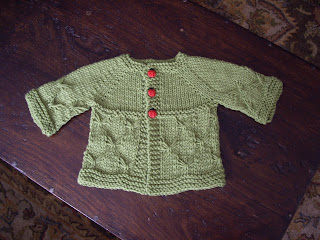 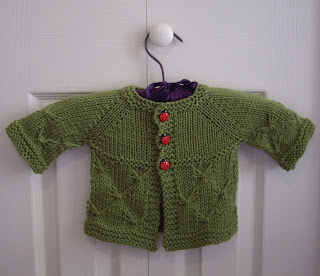 notes:
Great little pattern! The butterfly details were easier to work than I expected. Next time I might switch to size 6 DPNs for the garter stitch cuffs, as they do flare out a bit, and there are no sleeve decreases. I found the ladybug buttons at JoAnn. The yarn's fine -- I wanted something superwash, and this was on clearance and quite affordable. A slightly thicker yarn would work better for this pattern, though (heavy worsted rather than light worsted). 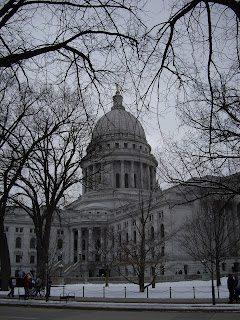 Paul and I zipped up to Madison over the weekend for an exciting (and victorious) Badgers hockey game. Protesters were out in full force at the Capitol on Saturday, peacefully assembling and speaking out against Scott Walker's draconian proposals. 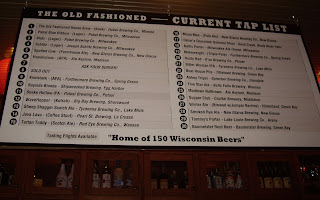 The Old Fashioned, a pub on the Capital Square, wowed us with their amazing selection of draft beers from Wisconsin. I have a new favorite -- Ale Asylum's Madtown Nutbrown Ale. A hint of sweetness, and a smooth finish... We had an excellent dinner and cocktails at Graze (the new gastropub cousin of food critic-darling L'etoile). A delightful weekend!  I'd move back to Madison in a heartbeat.

- I'm totally hooked on Holmes Inspection on HGTV. Mike Holmes is a god among men... he's just so capable! He and Damon save people from expensive disasters that their initial home inspection didn't catch. At times it's terrifying to watch!
Posted by Jodi at 12:33 PM 7 comments: