We started off this sunny autumn Sunday with harvest pancakes and apple/gouda chicken sausage. YUM! I tweaked this recipe a bit. 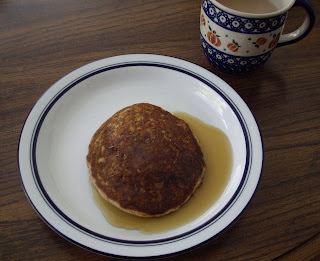 Pulse in food processor or blender:

Place in large mixing bowl and combine with:

Whisk together in separate bowl:

Add to dry ingredients and stir just to combine.

Lightly oil or spray a large skillet and cook over med to med-low heat.

Capricha is enjoying a lazy Sunday, too: 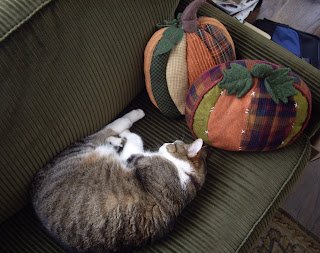 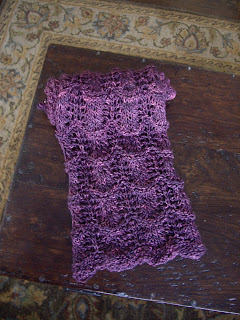 1) Francis Revisited ~ off the needles, onto me 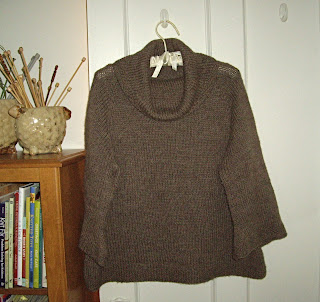 Notes: Super easy and unbelievably quick to knit. I actually used less yarn than the pattern recommended -- 2 skeins for a custom size somewhere between xl and xxl. I did not make it as long as the pattern said, and it actually might have been nice to do another inch or two on the body. The bell sleeves are cute and comfy in real life, but don't photograph terribly well.

The cowl is written the same way for the whole gamut of sizes; if you knit a larger sweater, you may want to add a few more rows and a few more extra stitches. It would be great to use a yarn with a little alpaca or silk for more drape, but it's hard to beat Eco Wool for affordability. The yarn really softened up when washed and blocked; it's no merino, but it's good stuff nonetheless. 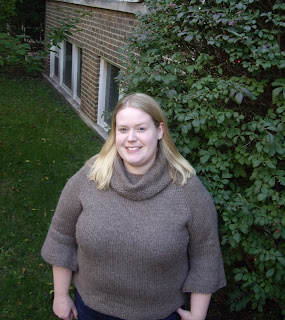 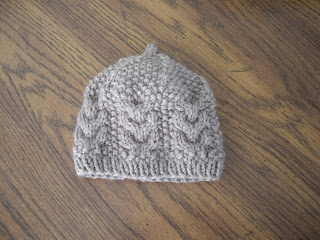 Notes: Amazingly cute and exceedingly fun to knit. I gave this to a fellow knitter's little guy on Sunday, and it fit great. I love that Barbara Prime worked seed stitch into the hat. Switching to larger needles for the owl section is a very clever move, especially since those cables really do pull in.

This isn't a free pattern -- it's a $2.75 download on Ravelry -- but it's worth every penny. $2 from each pattern sale goes to the Montreal Ecomuseum.
3) Stephen Fry in America

Awesome! I loved Stephen Fry in Jeeves & Wooster and Tristram Shandy: A Cock and Bull Story (plus he was the only palatable part of V for Vendetta); this 6-part TV series wherein he visits all 50 states does not disappoint. Originally aired in 2008, it's being shown again on HDnet. Two things especially noteworthy: 1) winters in the upper Midwest are apparently a bit too chilly for this Briton, and 2) he actually goes ice-fishing in Minnesota.

4) One Fast Move or I'm Gone
Ben Gibbard & Jay Farrar teamed up to write songs inspired by Jack Kerouac's Big Sur for a new documentary. A little bit of Son Volt-style alt country, Gibbard's wonderful voice, inspiration from Kerouac, what more could you want? Especially if you went through a teenage Beat poetry phase, as I did. You can stream the new album here, from the sidebar of this review. More info here.

Gibbard and Farrar are playing a show at the new Lincoln Hall on Oct. 26. I'm so there! Apparently the makeshift band for this limited tour includes members of Son Volt, Death Cab, and Mountain Goats.
Posted by Jodi at 3:30 PM No comments: 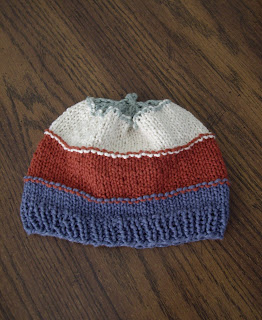 Join color B and do 1 purl round, then 10 knit rounds. Same deal with color C.

After I did 1 P round with color D, the hat measured about 5 inches. I started decreasing every round, and topped it off with a little 4-stitch i-cord (worked for about 5 rows).

Next time I’d do 8 rounds of each color, and I’d decrease every other row at the top.

what do you do 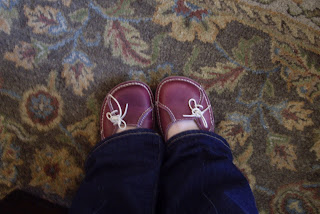 Hooray for new shoes! I copied Kate at Needled and ordered these Red or Dead "Rolos" from Schuh. They appear to be out of the red, so I went with this playful purple/burgundy shade. The brown ones are super cute, too.
Posted by Jodi at 3:29 PM No comments: 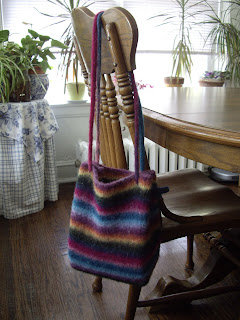 Pattern: Booga Bag, by Julie Anderson
Yarn: Noro Kureyon, #170, 3.5 skeins
Needles: US 10.5 16" circs and DPNs
Notes:
Easy pattern, and it's fun to watch the Noro knit up, but the handles seem a little insubstantial. Fulling took a few rounds through the washer and created tons of fuzzies in the washer even though I used a zippered washing bag. I'm always afraid of destroying the washing machine with felted knits (NB the Yarn Harlot's warning).
--------------------------------------
My parents (in Minneapolis) actually had snow yesterday, and already I have busted out scarves, mittens, sweaters, and wool socks for the season. Paul and I still ate brunch outside today at Milk & Honey Cafe despite the cool breeze, as it's probably our last chance this year.

We also tried O'Fallon Pumpkin Ale - pumpkin-y and spicy, but not nearly as good as the pumpkin whiskey from last weekend.
Posted by Jodi at 3:38 PM No comments:

on the right foot! 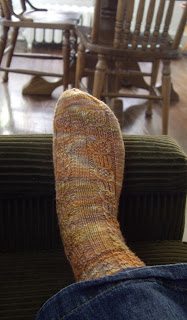 I'm not a big sock knitter (although I am a big wool-sock wearer!), but the Socktoberfest bug does seem to have bitten me. I finished #1 of my little pumpkins socks on Oct. 1, setting just the right tone for the month. 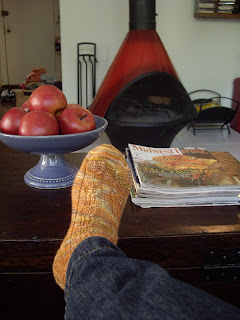 My aim is to knit second socks (Dragonfly, Little Pumpkins, & Little Shell below) so that I actually have some pairs to wear as it gets chilly. 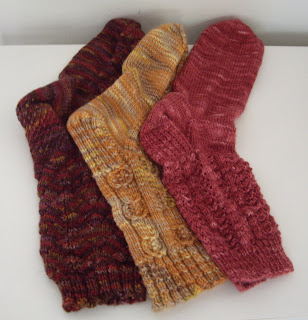 Also on the list are the Cable Footies from One Skein in red Lorna's Laces Shepherd Worsted that has been earmarked for this project for eons, but perhaps that would be shooting the (harvest) moon.
-----------------------------
also on the autumnal front...

Milwaukee's Great Lakes Distillery teamed up with the Lakefront Brewery to make Pumpkin Seasonal Spirit. It's distilled from Lakefront's Pumpkin Lager, and it's quite tasty -- essentially a pumpkin spice whiskey. Last night Paul mixed up some Pumpkin Old-Fashioneds, inspired by a recipe here (and a trip to Brocach last fall):

In an old-fashioned glass muddle the cherries and orange bitters. Add Pumpkin Spice Seasonal Spirit, seltzer, maple syrup, and ice. Stir well. Garnish with a cherry or an orange wheel.