Neko Case releases her new album, Middle Cyclone, next Tuesday, and I'm enjoying all the build-up. Fox Confessor Brings the Flood was pretty much the soundtrack to 2006-07 for me (as well as countless others). 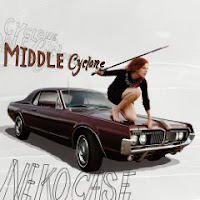 I'm still absorbing the new album -- a different feel from Fox Confessor, full of love songs and paeans to nature. Only "Never Turn Your Back on Mother Earth" strikes me as a dud (insipid lyrics and backing vocals). Paul and I have tickets to her April 24th concert at the Chicago Theatre. Can't wait!
----------------------
After a rather light-on-the-veggies January, I've been trying to get back into the habit of incorporating oodles of vegetables into our meals. Here's a recipe from last weekend that was a success.

This is one of the few recipes I really like that isn't as good leftover. Alas! But it's wonderful right when it's made, and it's easy as can be. The simplicity of the recipe showcases high-quality ingredients, so it's worth splurging on flavorful feta (not Athenos or whatever comes pre-crumbled in the regular cheese section at the supermarket) and olives.

Bring a large pot of water to a boil for the pasta. Preheat the oven to 425 degrees for the veggies.

In a large bowl, combine the peppers, tomatoes, onion, celery, garlic, basil, oregano, and 2 T. of olive oil. Toss to coat the veggies thoroughly. Spread the veggies on a baking sheet (or 2) so they rest in one layer. [Lining the baking sheets with foil leads to easier clean-up, but is a bit wasteful.] Bake for 20 minutes, or until the peppers are tender. Toss with a spatula once during baking.

Once the water starts boiling, drop the pasta in and cook until tender yet chewy, about 12 minutes. Drain thoroughly in a colander and place in a large bowl. Spoon the veggies onto the pasta along with the remaining 2 T. of oil. Sprinkle on the feta cheese, olives, salt and pepper (be generous with the pepper), and toss.
Posted by Jodi at 11:20 AM No comments:

This is the event for you -- the Snuggie Pub Crawl.

Personally I'm having a hard time envisioning anything funnier than a bunch of people dressed as neo-Druids sipping vodka tonics. Especially since Snuggies are apparently backless.

On a related note...
(NB: If you can't take strong language and/or sarcasm, this is not for you)

I think I've found the perfect scarf pattern for knitting night! Whenever I try to knit a complicated lace or cable pattern at knitting night, I invariably have to rip back a row or two after I get home. Dim lighting and good conversation just don't mix well with fancy patterns. The Opera Scarf pattern is free from Blue Sky Alpacas. There's just one pattern row that's quite easy to remember. 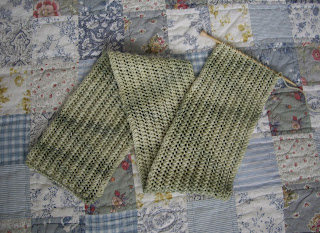 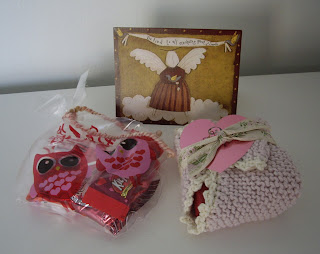 Monday's mail included a lovely pay-it-forward parcel from Stacey, AKA Peaknit. The Sweetheart washcloth is so darn cute I'm almost afraid to use it! Susan B. Anderson (a Madisonian) designed this pattern, and my knitting circle is doing another one of her patterns as a KAL at our retreat next month -- Knit Chickens. 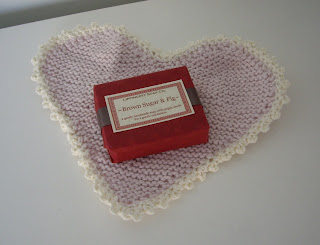 And the soap (from the Lippincott Soap Co.) smells heavenly. I love fancy, handmade soap. All the other goodies are marvelous, too. Some of the chocolate has already been consumed (yum!), and stitch markers and lip balm always come in handy. I still have one more pay-it-forward parcel to finish up myself (Melissa @ Owl & Acorn, I'm sorry I'm so slow!). 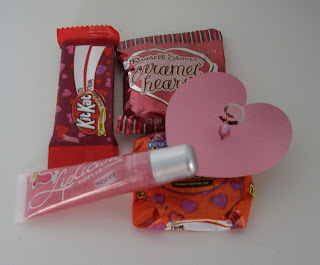 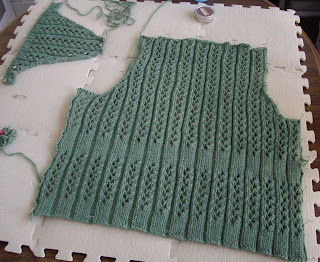 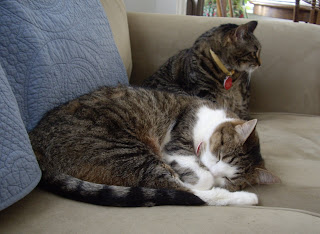 sleepy Capricha and grumpy Kylie
Posted by Jodi at 10:28 PM No comments: 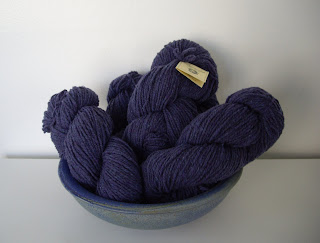 Beaverslide McTaggart's Tweed in "Wild Myrtle" (the old 2-ply, 210-yd put up), destined for the Drop Collar Cabled Jacket from the fall/winter issue of the Debbie Bliss Magazine: 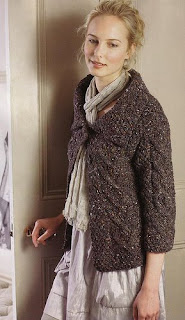 There are some really cute ones out there, and it seems very wearable, especially up here in the North. 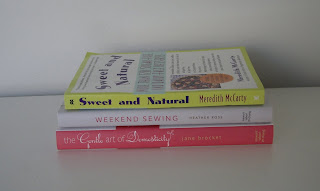 Sweet and Natural: More than 120 Sugar-Free and Dairy-Free Desserts, Weekend Sewing, and The Gentle Art of Domesticity. I'll keep you posted how they are. Weekend Sewing is hot off the press, and I love Heather Ross's fabrics. 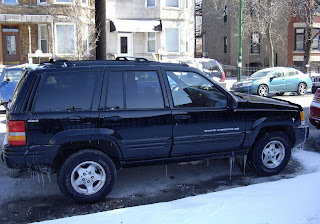 Yeah, Paul and I have shared one car since we moved to Chicago. We made it work a long time (environmentally friendly! financially responsible!), but my carpool buddy is moving out of state this spring, so it's Jeep time for me! She's already bedecked with the snow and ice that's inevitable up here. 4WD and heated seats are going to make it a very nice winter ride. 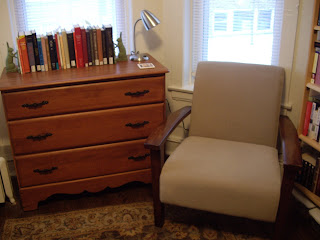 Over the past year we've been slowly transforming our study. It started off as a rather ramshackle space, but now it's comfy and welcoming. The area's a bit small, but I really wanted a reading chair. Now my dream chair would be a Morris chair, but I have Stickley taste on an IKEA budget. We found this on deep discount at World Market, and the wood legs and arms help cut down on the cat scratching. The wool rug, another bargain (clearance + coupon at Target's home design event last month), is the most recent addition.

This bookcase, passed down from friends who turned their home office into a nursery, now holds all my craft books and magazines. 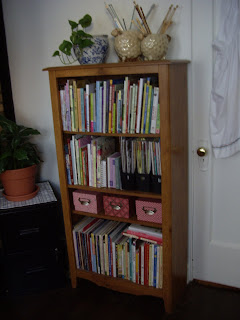 The desk matches the bookcase, and I found the chair at World Market (once again on sale). I love the high hutch on the desk, as it divides the room into half and clevely conceals the litterbox / storage area). 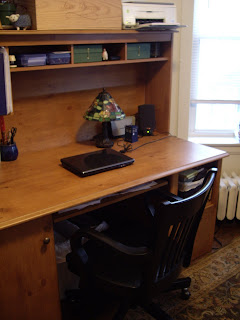 Overall I'm very pleased. Despite a limited budget, we managed to transform a shabby eyesore into a cozy place to read, work, and knit.
Posted by Jodi at 9:57 PM No comments:

Mother Nature teased us with a taste of spring this week, with temps in the 50s. Everyone walked around with smiles on their faces, people chucked off layers of wool and down, and all was well in the world. I even rolled down the window of my car (yes, my 2001 Malibu still has old-fashioned crank windows -- people are flabbergasted at this and don't know what to do at first).

So anyway, in honor of spring, I cast on for a short-sleeved cardi in spring green: 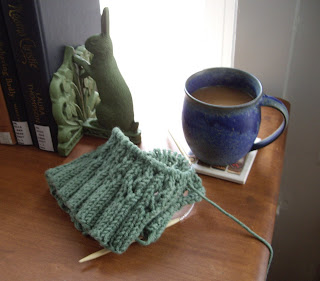 It's the Ariosa Wrap Cardi, a free pattern from Classic Elite. I'm using some well-aged yarn from the stash -- Jaeger Extra Fine Merino Chunky (nice, but not as smooth and cushy as the DK version). Sknitty just finished up a gorgeous neutral version that inspired me. I even tried something new: I knit the sleeves first, both of them: 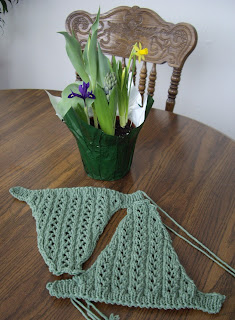 This is revolutionary, as my sweaters usually get stranded on Sleeve Island, sometimes indefinitely.

Finally, a Just Enough Ruffles scarf for me. It was hard to give the last two away, so now I have one of my very own. I love this shade of Malabrigo -- Pigeon, a very soft light grey-ish blue. It made for great comfort knitting while watching a couple "guilty pleasures" movies, Music and Lyrics and Love Actually. 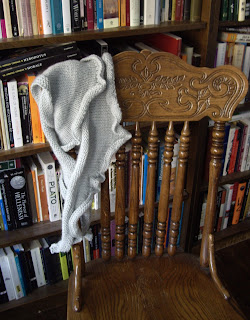 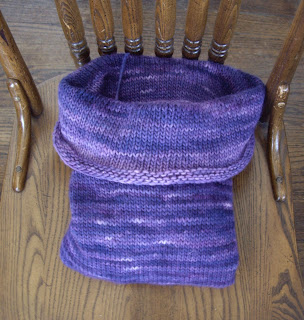 The horizontal stripes produced by the variegated yarn aren't very flattering, but the fit is absolutely perfect, and it's soft and cozy. Lessons learned:
1) don't use variegated yarn for sweaters
2) it's well worth the time to measure sweaters that fit me well AND to swatch carefully :-)
3) adding some extra length was a great idea

There's still finishing work to be done, then I'll post a modeled picture.
Posted by Jodi at 9:13 AM No comments:

Yeah, I'm one of the last to jump on the cowl bandwagon. I always thought they'd mess up my hair too much. But it has been a long, cold winter, so I'm willing to try just about anything that purports to keep you cozy and warm. Guess what? I love it! Like the neck gators that we used to wear skiing, but much posher and nicer. This one's a gift, but I just wound some Plucky Knitter yarn for one for me. 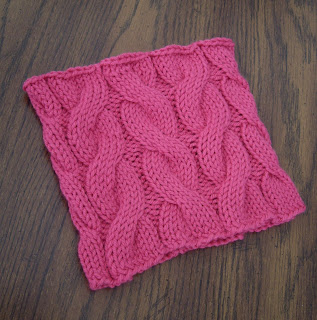 Target is unveiling a line of budget-conscious housewares, office storage, and clothes by Orla Kiely, one of my favorite designers. Hurray!
Posted by Jodi at 5:04 PM No comments:

poetry reading for the feast of St. Brigid

Every day is poetry day for me, but in blogland Feb. 2 marks the annual silent poetry reading for the feast of St. Brigid.

The Snow Man
by Wallace Stevens

One must have a mind of winter
To regard the frost and the boughs
Of the pine-trees crusted with snow;
And have been cold a long time
To behold the junipers shagged with ice,
The spruces rough in the distant glitter
Of the January sun; and not to think
Of any misery in the sound of the wind,
In the sound of a few leaves,
Which is the sound of the land
Full of the same wind
That is blowing in the same bare place
For the listener, who listens in the snow,
And, nothing himself, beholds
Nothing that is not there and the nothing that is.