tangled up in (TARDIS) blue 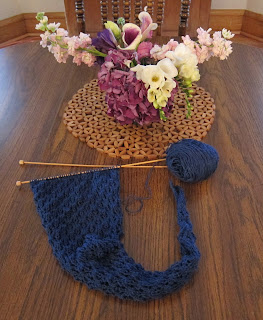 When Paul asked me what I was knitting the other night and I showed him the pattern, he replied, "That's the nerdiest thing I've ever seen." 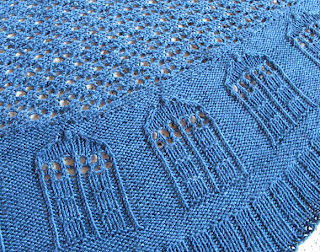 Yes, geeky indeed, but I'm loving the yarn's silky sheen and the easy lace pattern. Can't wait to start the TARDIS bit. It's going to be awesome.
Posted by Jodi at 1:05 PM 15 comments: 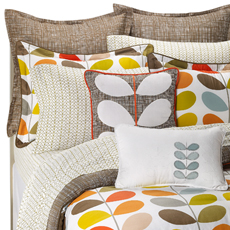 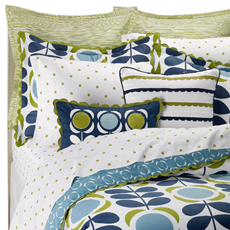 I just placed an order online, as my local store doesn't have anything in stock yet. As to the fabric quality, who knows... I'll keep you posted. That was a big problem with Target's Liberty of London line -- I returned everything I ordered, as the fabric quality was so poor (despite the charming prints).
Posted by Jodi at 11:10 AM 5 comments: 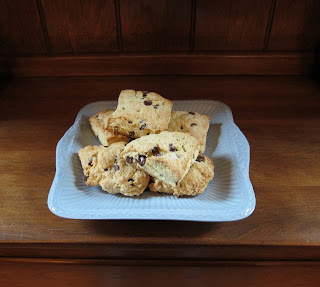 I've been on a real citrus kick in the kitchen lately. It started with a batch of Joy the Baker's orange and dark chocolate buttermilk scones, and then progressed to lemony zucchini goat cheese pizza and French-style yogurt cake with lemon.

One of our guests last weekend is vegan, and that can be a big challenge when it comes to baking. I'm not a big fan of the complicated vegan recipes that use a lot of weird ingredients (plus I'm sensitive to some of the substitutes used in things like vegan creamer and vegan cream cheese -- give me eggs and butter over that stuff any day). These orange cupcakes, however, were a big hit. They're moist and fruity, with a fine texture. 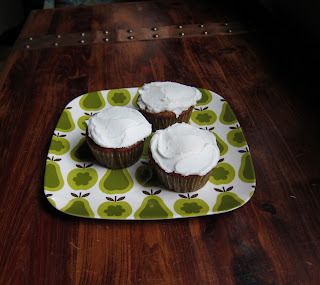 Preheat oven to 350 degrees. Line muffin tins with liners, or grease and flour them.

Whisk together the flour, sugar, baking soda and salt in a large bowl. Add the remaining ingredients and stir together until smooth.

Scoop the batter into the prepared muffin tin. Bake about 20 minutes, until a toothpick inserted into the center comes out clean. Put the muffin tin on a wire rack to cool for 10 minutes. Remove the cupcakes from the tin and let cool on the wire rack.

I topped mine with a very basic frosting (Smart Balance + powdered sugar + OJ + vanilla), but I suspect that using a thin frosting of just powdered sugar and orange juice would have equally nice results.


adapted from the 1997 edition of The Joy of Cooking

My study was a shameful mess of boxes, books, and knitting supplies for the first few months after we moved in. The walls were not only a boring shade of beige, but they were in terrible shape.

After a week of scrubbing, spackling, painting, and organizing, my study emerged as a cheerful workspace. 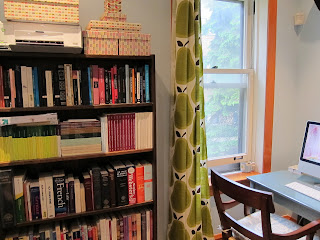 I'm now proud to leave the door to the study open when friends come over, and having a pleasant place to work is inspiring me to keep it tidy. The Orla Kiely storage boxes are from Pop Deluxe, a great little store on State Street in Madison, Wisconsin. 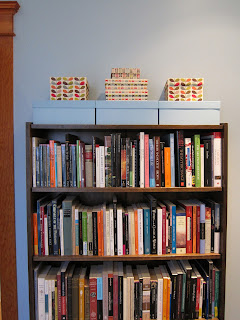 The paint is Benjamin Moore's Ultra Spec 500 zero-VOC in Bird's Egg. I went to J. C. Licht, a local paint store, instead of a big-box store this time, and the experience was terrific! I initially planned to buy Natura, another Benjamin Moore zero-VOC paint, but the salesperson talked me into this one, which is less expensive and supposedly even better. No complaints from me! Painting wasn't stinky or noxious at all. 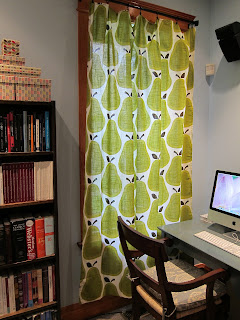 I made the curtain using an Orla Kiely tablecloth from her Target line. It cost a pretty penny on eBay, but it was worth it. Initially I was planning to sew a rod pocket, but decided to go with curtain clips for a more modern look. Plus it's really, really easy. 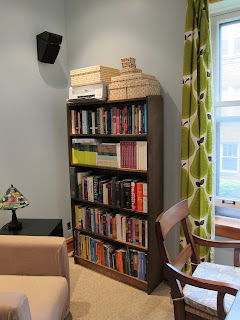 The desk chair is Pottery Barn's Montego Rush Seat Chair. Sadly, the pretty rush seat is covered up to protect it from Capricha. My comfy reading chair is originally from the Madison Public Library, and I've been carting it around with me since 1999. It is wearing an inexpensive slipcover from Target (the color selection wasn't too great so boring tan it is, at least for now).

I still need to put up art and make some throw pillows and maybe a quilt for my reading chair, but I'm pleased as punch already! I'm holding off on the sewing projects since supposedly Bed Bath and Beyond has an Orla Kiely line in the works.