two cats, one heated cat bed in the study 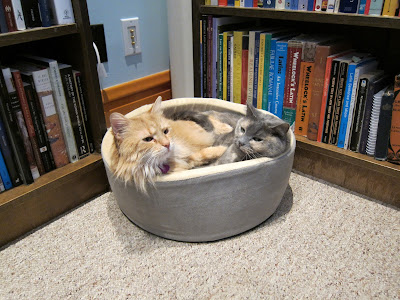 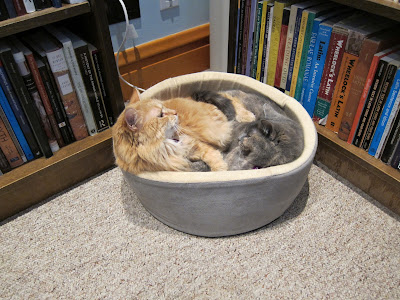 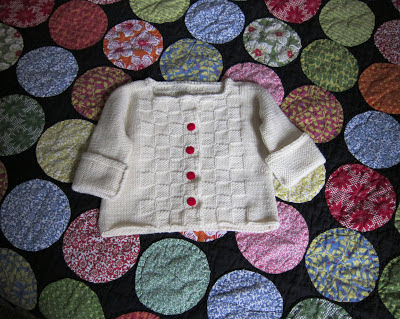 notes:
The directions get a bit confusing once you get to the left front neck, and the pattern requires careful reading. I moved the buttonholes closer to the edge, since I wanted to work a single crochet border around the whole shebang to make it look neater and more finished. I should have worked one more buttonhole at the top. Doh! Also, the sleeves are extremely long -- you are supposed to roll them up, but I think it's a little overboard.

I'm trying to make bolder button choices -- often I use very boring, neutral buttons, when a pop of color really would be a nice finishing touch. I'm so glad I found these cute red buttons -- 5/8” “Colors Favorite Findings” in color no. 2. Very affordable! $.99 for a pkg of 20 at JoAnn.
Posted by Jodi at 6:05 PM 5 comments: 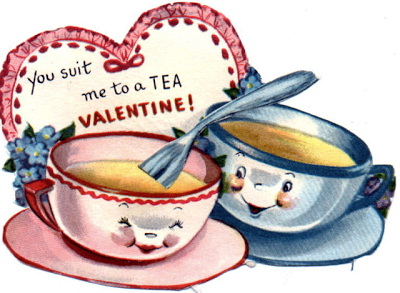 I was hoping that my next FO post would be my textured yoke cardi or Aidez, but the buttons for the former haven't arrived in the mail yet (oh, etsy), and the last Aidez sleeve still has four inches to go.

So another wee knit it is! I first spotted this pattern on Posie Gets Cozy. 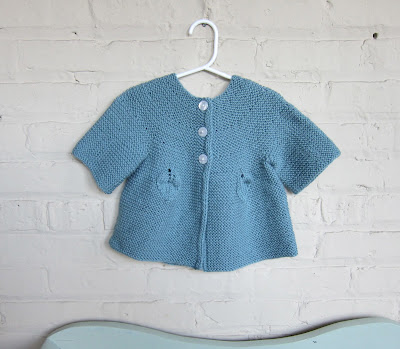 Love how soft and cozy the yarn is! Cashmerino makes knitting oodles of garter stitch a delight.
Only one real modification -- I knit the sleeves flat and seamed them. Garter stitch in the round isn’t my favorite, and my gauge changes significantly moving from knitting flat to knitting in the round.
Posted by Jodi at 8:51 AM 7 comments: 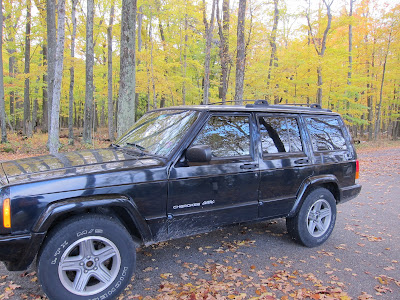 I'm not generally a big fan of change. We had grown pretty attached to our two rugged old Jeeps, zipping across the Upper Midwest for camping trips, Madison farmers' markets, Packers games, and family visits. OK, one doesn't exactly zip around in a Jeep -- they're built for durability and toughing out bad weather, not speed, but we loved them. Plus they're awfully cute. 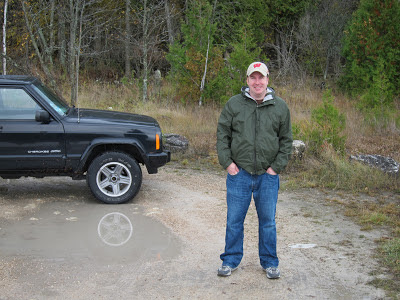 Gas mileage? Terrible, but we lived with it for a long time, thinking that at least we were re-using an existing car rather than creating more waste. But the Cherokee's repair bills were adding up, and the rusty patches were growing, so it was finally time to bite the bullet.

It was time for something green. 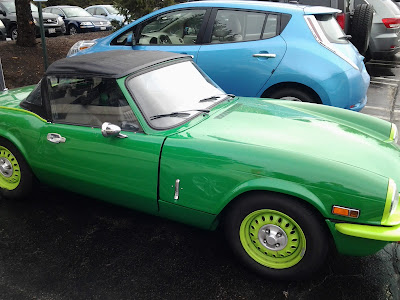 OK, maybe not quite that green -- this is a retrofitted classic car turned EV parked at one of the charging stations at Paul's office. Ours is the cute little blue Nissan Leaf in the background. 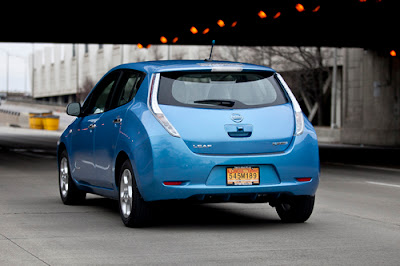 I wasn't planning to blog about this, but the recent New York Times article on electric cars in the Netherlands, its review of the Tesla S road trip and subsequent controversy, and President Obama's touting of green energy initiatives in the State of the Union speech made me think it was worth a mention. We love it. Fun to drive, lots of torque so it's peppy, zero emissions, and no trips to the gas station.

There are some downsides, though -- it really helps to have a garage and somewhere to plug in at home. Relying on public charging stations is risky, because the infrastructure just isn't there yet. Cold weather dramatically reduces the battery range -- much more than Nissan admits -- as does driving at freeway speeds. Even in average weather the range is at best around 70 miles. Recharge times are long. This is not a car for road trips. For many people in urban areas, though, this is an excellent second car. Work commutes, errands, and nights out on the town are easy and require no extra planning.

Anyway, I just want to say that there are people in this country who are willing to take a risk on new, green technology and put their money where their mouth is, and we are two of them.
Posted by Jodi at 10:48 AM 7 comments:

fo: a warm hat for a snowy day 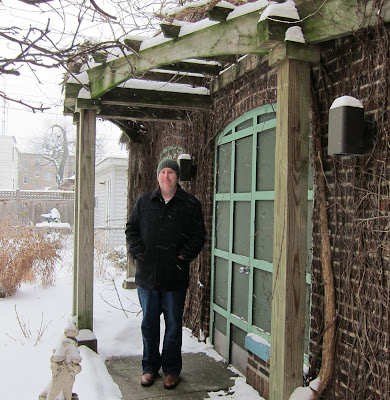 There's nothing like being warm and cozy when winter finally hits! I knit Paul a new hat just in time for snowy weather. Most of the other hats I've knit for him have been worsted-weight, and apparently not quite the ticket for truly frigid days. This one, however, apparently does the trick quite nicely. 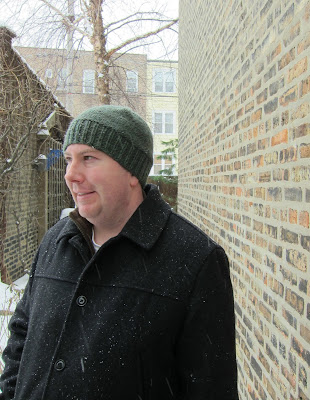 notes:
Easy, quick pattern! I apparently don't mind purling in the round one bit. Paul says it's very warm, and he has been wearing it a lot, which is the true proof of a handknit hat.

I made the medium size (21"), but did make it a little bit shorter. The yarn is terrific -- soft and squishy, not itchy at all, and comes in some beautiful heather shades. I'll definitely use it again!

We love pizza around here. Neapolitan, Chicago deep dish, even Quad Cities style (malty crust!). I often use store-bought sauce (the horror!) or Heidi's five minute tomato sauce when we make pizza at home, but I've recently discovered the simplicity and terrific flavor and texture of roasted plum tomatoes. 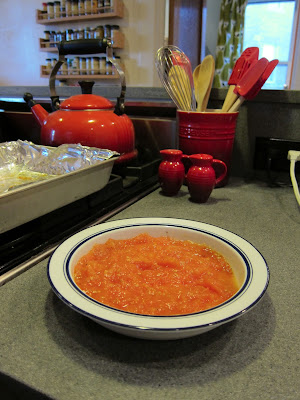 - Line a 9x12 pan with foil for easy clean-up (if desired) and lightly mist with cooking spray. 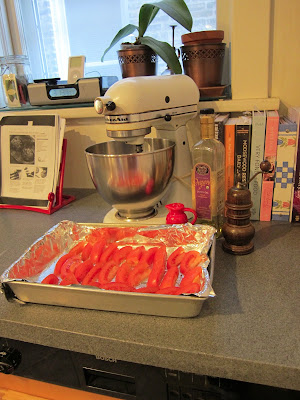 - Place the quartered tomatoes in the baking dish. Drizzle with olive oil and season to taste. Bake for 30 min.; do not stir. 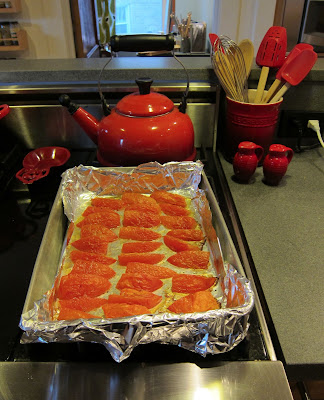 - Remove the baking dish from the oven and mash the tomatoes with a fork, removing the skins as you mash.

- Use the roasted tomatoes as a delicious base for homemade pizza! Any leftovers are very versatile. I tossed the rest of them into a smoked salmon frittata, and it was tasty.
Posted by Jodi at 5:13 PM 4 comments:

Brrr... it was a balmy zero degrees F when I woke up this morning. While this is pretty standard for a Minnesota winter, it's unusual for Chicago. Frigid temperatures like this often come with beautiful blue skies and sunshine, which I love, and the cold, brisk air is invigorating! The crock pot is cooking away with Skinnytaste's picante chicken and black bean soup. 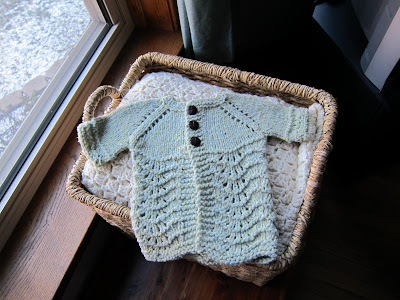 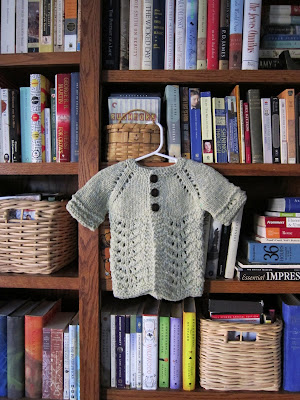 notes:
I absolutely love this Beaverslide yarn. It is super cooshy and cozy, and once you block it, the yarn blooms and becomes fleecy. Downside? It's hand-wash only. I made this a little shorter than the pattern. Also made short sleeves since I didn’t have very much yarn (this is leftover from another project). The buttons are La Mode style no. 29509 / hook 639. 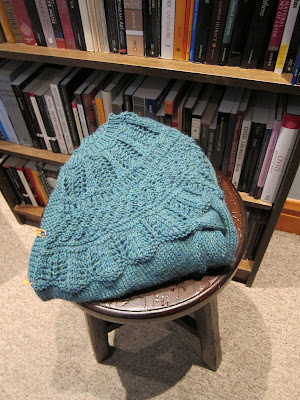 Buttons and blocking, then it's ready to wear! The yoke went very quickly -- the textured stitches were fun to work -- as soon as I tired of the lace pattern, it was time for trinity stitch, and so on...
Posted by Jodi at 10:00 AM 8 comments: