things that are making me happy on this sunny Thursday

Looking forward to this Smiths/Morrissey tribute show at the Abbey Pub tonight... 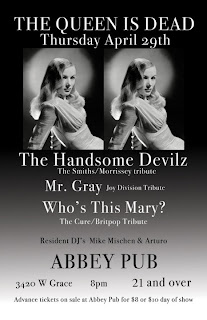 Absolutely creative, thoughtful, and delightful. Though the narrator is a rat, it's not a children's book, for sure. Firmin is jam-packed with literary references, word play, imagination, musings on life, both human and rodent. From the very beginning, where Firmin "Lolita, light of my life, fire of my loins", I could tell this was going to be a great book.

The premise of the book -- a rat is born in a Boston bookstore and grows up devouring books, both literally and metaphorically -- had the potential to be cloying and annoying, but turns out completely otherwise. While a heart-wrenching read, but Firmin also celebrates the power of literature and imagination even when you're down and out.

Ciao Bella pistachio gelato. Yum! It may not quite compare to my favorite gelato stand in the sun-dappled Monteverde neighborhood on the Janiculum, but it's pretty darn good.

P.S. The Summer 2010 Interweave Knits preview is now available. Meh. Maybe the Buttercream Jacket, but that's about it for me. That said, summer issues of knitting magazines rarely do much for me.
Posted by Jodi at 1:22 PM 7 comments:

languish no longer, my pretties!

My March and April knitting has consisted of finishing up a bunch of old projects that have been languishing far too long. It doesn't make for the most fun knitting (or blogging, for that matter), but it's great to get these things off the needles and get my knitting corner organized for our upcoming move.

Case in point: an Easy Peasy Squares Baby Blanket. I finally ordered one last skein of yarn to finish this up! 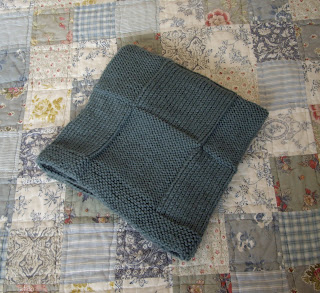 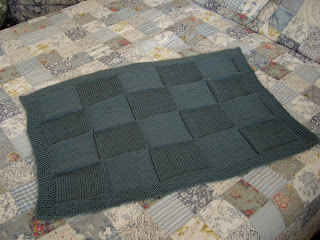 Notes:
Easy pattern, great squooshy yarn! I tweaked the numbers and pattern repeats a bit. The garter stitch edging does pull in a bit, but blocking helps. I think "cornflower" is a misnomer for this color. A real cornflower looks like this: 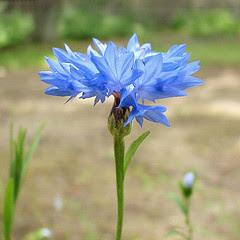 Curious... Then again, my color knowledge is largely based upon the giant Crayola boxes of my childhood, so what do I know. Crayola is most definitely a significant cultural phenomenon, though, as otherwise millions would have no idea what "burnt sienna" looks like.
------------------------------------------
Blue-green hues are really rocking my world lately, though, as I've also cast on for a Buttercup top in this shade of Elsebeth Lavold Hempathy: 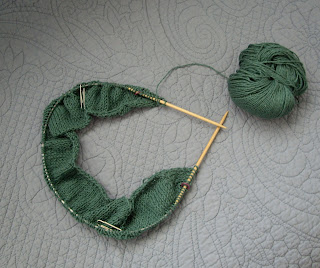 I'm following this tutorial to apply an i-cord border to another baby blanket that has been languishing for months, waiting for just this very step. 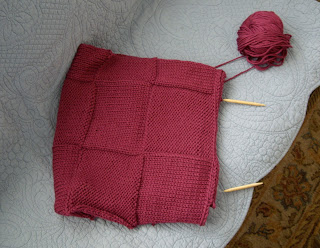 It went very well on the bound-off edge, but working on the next side is making me crazy! Also, it would have been wise to go up a needle size or two for the edging. Keeping it loose prevents the edging from pulling too much.
Posted by Jodi at 11:01 AM 12 comments: 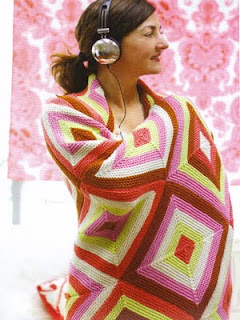 diamond afghan
Here's a sampling of what's in Amy Butler's new book, Midwest Modern Knits! The home dec items appeal to me much more than the garments. 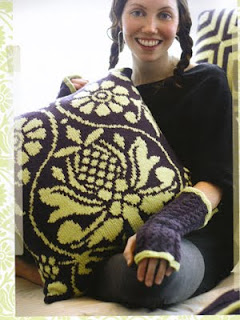 blossom pillow (large)
--------------------------------------------
Amy Herzog over at stash, knit, repeat has just started a series of tutorial posts called "Fit to Flatter," a guide to knitting items that flatter your shape. Her first tutorial has already prompted me to rethink how I go about selecting sweater patterns. Deep V-necks, scoop necks, and square necks are very flattering on me, and many of my store-bought sweaters and tops feature them. Why don't I ever choose knitting patterns along those lines? Seems like a no-brainer!

As a result, these patterns have been moved to the top of my sweater-knitting queue:
- Buttercup
- Vesper
- Mondo Cable Pulli
Posted by Jodi at 4:52 PM 7 comments:

something old, something new...

I dug Liesl out of the dark corner where she had been hibernating, and knit the sleeves last week! What's left to do now is reinforce the neckline with single crochet, which actually has me a bit nervous. 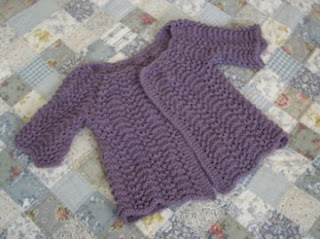 I had fallen off the wagon a bit with the 10 Shawls in 2010 challenge. There's nothing like a KAL to make me want to head off in a completely different direction! Those minor rebellions... 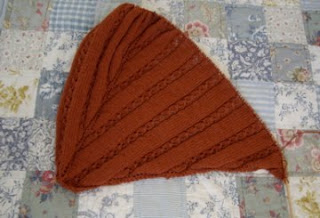 The yarn is Knit Picks Gloss Sock in the (sadly discontinued) Pumpkin colorway. The pattern is intuitive, and the charts are very clear. I didn't love the cast-on method, I will admit. I'm doing 3 repeats of Chart 2 rather than 2. This time I actually have plenty of extra yarn, so there's no chance of running out! The pattern requires some pretty serious blocking, so in the end it should look much less ribbed and smooshed.
--------------------------------------
something both new and blue

We're moving next month, and I'm ever so excited! We're bidding adieu to Lakeview after five great years and heading to Ravenswood Manor, a charming neighborhood along the North Branch of the Chicago River. It's close to Lincoln Square, the most "Wisconsin" part of Chicago, complete with German bars, Gene's Sausage Shop, the Old Town School of Folk Music, coffeeshops, all sorts of good things. 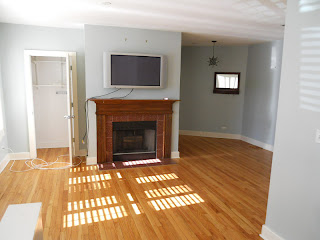 I'm busy contemplating paint colors for other rooms, though we're keeping the light blue in the living room, of course, because blue is the best color. ;-)
Posted by Jodi at 2:58 PM 18 comments: