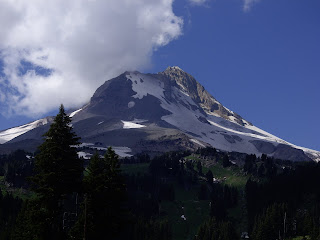 Oregon was beautiful, and it was such a treat for Paul and me to take some time together and just enjoy things.

the peace of the Japanese Garden... 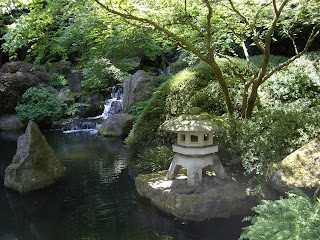 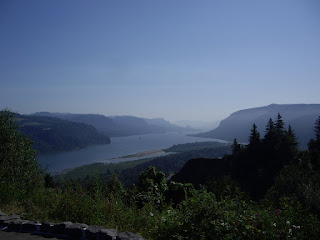 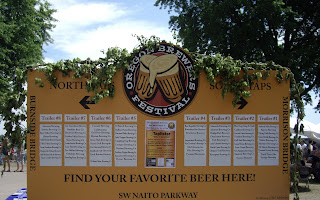 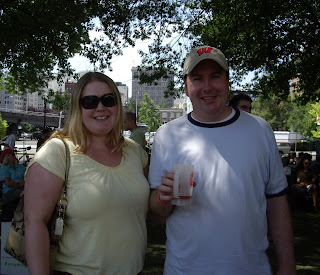 my version of bliss... 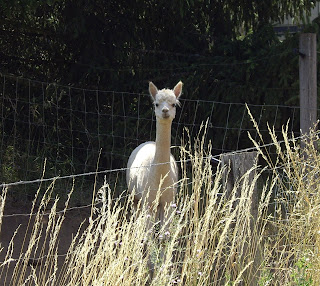 More on my trip and knitting to come, I promise. Look, I'm already hard at work on a new design project. Yep, it's hot enough here that I've moved all my stuff to the dining room table to be closer to the air conditioning. 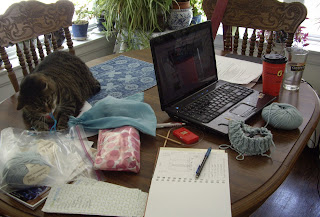 When I announced to Paul and our friend Andrea that I was going to the Midwest Fiber & Folk Art Fair this past weekend, they were stunned. Yeah... it turns out that regular people think of dietary fiber, not wool, when they hear "fiber." Paul then unofficially proclaimed it the Black Bean Festival. Muggles!

One of the highlights... 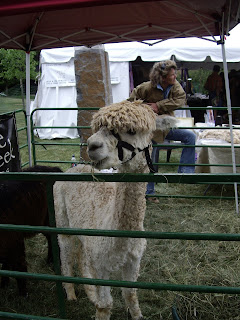 So cute! I went with a few girls from my knitting circle, and a great time was had by all, especially at the Briar Rose booth... talk about swoon-worthy fiber. 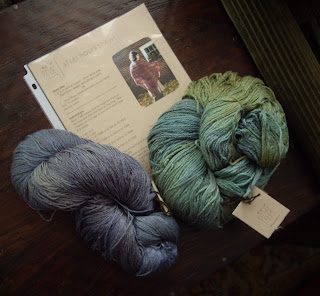 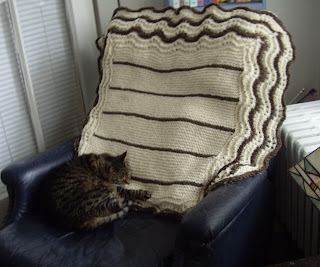 I've even seen her burrow under it and hide behind it. I haven't washed and blocked it yet, since I'm wondering if that's some of the cat appeal, and I'm enjoying the show too much.

Pattern: Hap Blanket, by Ysolda Teague (from Whimsical Little Knits)
Yarn: Cascade Ecological Wool, Natural (1.25 skeins) and Coffee (.25 skeins)
Needles: Clover US 11 bamboo circs
Notes:
Hmmm... I wish I liked this better. The yarn is great -- very lofty and soft, marvelous price and yardage, wonderful natural colors. I usually love Ysolda's patterns, but this one isn't my favorite. There are serious errata. Row 5 should be P (not K); more significantly, the last page of the pattern doesn't seem to be necessary and was ceremoniously disregarded by me. The written-out instructions are rather annoying -- they often refer back to other rows that themselves refer back to yet more rows.

Feather and fan is usually my absolute favorite stitch pattern to knit, but here it's a pain. Switching colors after YOs is nearly impossible to do well. I don't like knitting F&F in the round on those big needles, either. 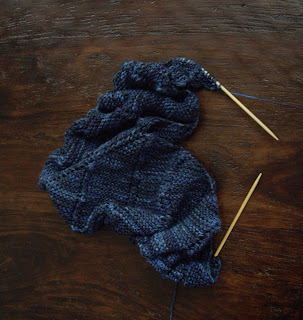 I'm using Impulse of Delight's Superwash Merino/Silk in "Aubergine." Ashley used this yarn for a beautiful Ishbel a while back, and I couldn't resist the allure of those gorgeous inky blues. Yes, yes... usually aubergine means purple, but the color makes me so happy that I won't complain. It has a lovely sheen, and it's a nice, springy 2-ply. I have found a few odd spots in this skein though.
----------------------------------
Also, since my friends are procreating at an alarming rate, a raglan baby sweater in Cashmerino, inspired by Lolly's two cute versions. 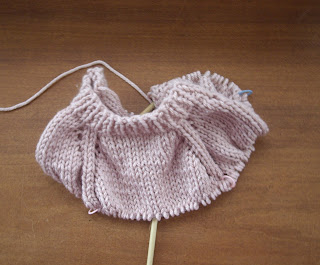 This needs to be done for an early August baby shower, which I don't think will be a problem. I'm subbing YO raglan increases:

I'm back from a whirlwind trip to Minnesota. Some highlights...
- spending time up north on Roosevelt Lake (NW of L. Mille Lacs)
- visiting a new cidery in Stockholm, WI -- Maiden Rock Cidery. Their Honeycrisp hard cider is delicious!
- seeing Public Enemies -- the scenes of Billie's apt. along the El tracks were shot in my back alley! I enjoyed the movie; that Johnny Depp can really act. It's a pretty straight portrayal -- not overly stylized, as many gangster movies are.

Notes: Great pattern - very fun and easy to knit. It's a yarn-eater, so be forewarned. I started off using leftover skeins, so I didn't follow the number of rows in the pattern -- I just knit until I ran out of yarn or thought it looked good. This blanket was a great opportunity to play with color. I hate doing actual colorwork, so this was perfect for me. Mission Falls is great to work with -- not too much wrist/hand fatigue considering that it's 100% cotton. 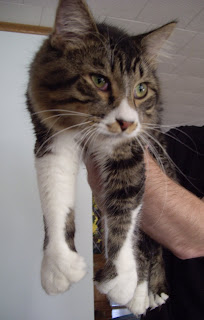 My cousin adopted a new cat while I was home last week. Such a cutie. See those paws? 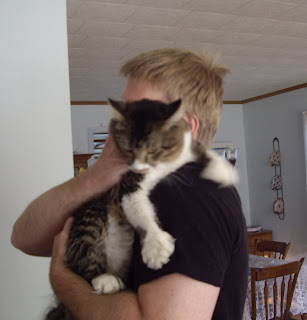 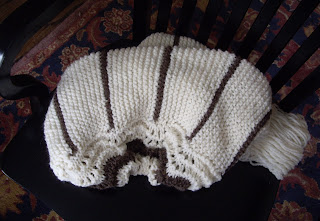 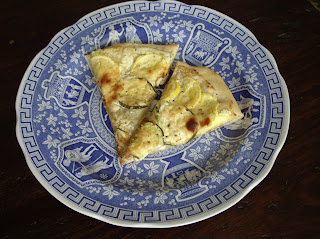 I whipped up a Lemony Zucchini Goat Cheese pizza for dinner last night. Yum! I substituted thyme for basil, and I added a sprinkling of shredded Parmesan. Next time I'd cut back on the lemon juice a bit. I used Smitten Kitchen's simplest pizza dough recipe, too, but I made it in the breadmaker on the "dough" setting, which worked perfectly.
Posted by Jodi at 2:54 PM No comments: