Much has been going on behind the scenes chez Caffeinated Yarn. First of all, we're moving! Again!  Egads... change makes me anxious, and the process of moving is terrible, but there are some upsides. 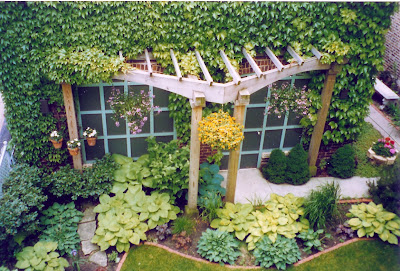 Such as the back garden, a peaceful oasis in the middle of Chicago. Plus we're just moving half a mile east, near the heart of Lincoln Square, a charming German neighborhood. We started packing boxes of books this past weekend, fueled by thoughts of the floor-to-ceiling built-in bookcases in our new living room and master bedroom. :-) Not all bad, indeed. 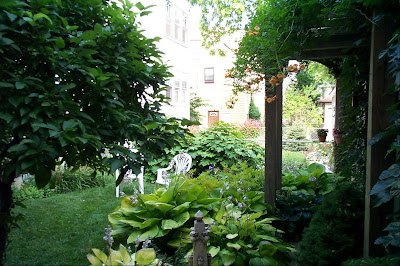 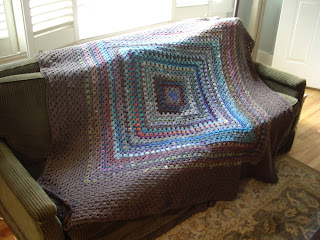 Oh yes, at long last I'm done crocheting the rustic Noro giant granny! All the ends have been carefully tucked to the wrong side, ready for me to weave them in before blocking this bad boy. It's a fantastic feeling to have it almost complete, as I started it back in February of 2010. Full details forthcoming after it's blocked.

a Monday miscellany
- interesting article on Trader Joe's
- tutorial on using paint to transform a ho-hum office organizer into something beautiful
- tutorial on crocheting a cute, vintage-inspired rag rug (I did some googling after spotting this gorgeous crocheted rag rug)
Posted by Jodi at 11:33 AM 21 comments:

As I was knitting away on my Shalder cardigan and sipping my morning coffee, I was struck by the  pleasing confluence of blue violet. 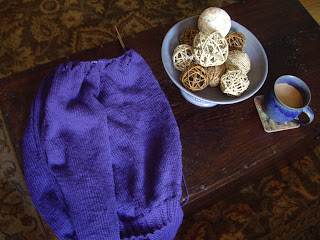 The lace yoke is well underway, and I can't wait to wear this cardigan this autumn. The nights are getting cooler and longer here in Chicago, so autumn is beginning to seem imminent and real. Plus Shalder needs to come off the needles before I can cast on for Levenwick or Aidez!

The pattern calls for Quince and Co.'s Lark yarn, but the blue-violet Rowan Pure Wool DK had been marinating in the stash for far too long. I did, however, order two skeins of Lark in Pomegranate just to see what it was like. Soft, springy, and what a beautiful, vibrant hue! 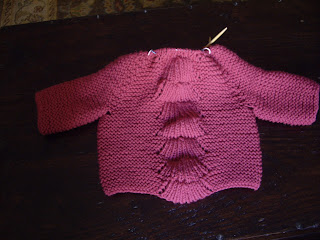 This is Camilla Babe in the smallest size. Gauge being the harsh mistress that she is, I have run out of yarn, and this color is on back order. Doh!
Posted by Jodi at 9:38 AM 8 comments: 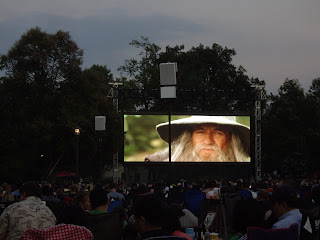 So, The Fellowship of the Ring to the accompaniment of the CSO while picnicking at Ravinia on a beautiful night was pretty much awesome.

What made it even more awesome? 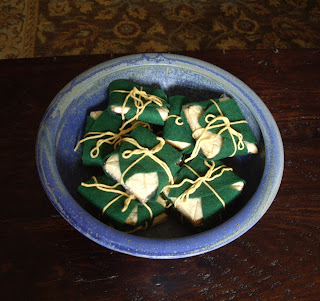 Lembas to sustain you on your journey. Recipe and mallorn leaf pattern here. Apparently the elves were actually big fans of lemon-flavored scones! The leaves are cut out of felt rather than foam, simply because there was already a plentiful cache of green felt in my craft supplies (why, I don't know, but I was happy to go with it). Sadly, we were forced to drink Crispin cider and Half Acre beer (brewed 1/2 mile from my house) in lieu of miruvor. 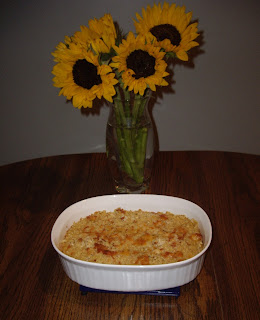 I threw caloric considerations out the window and made that easy beer mac and cheese recipe on Saturday! I wasn't up for another trip to the market, so there was some improvising (i.e., cleaning out the cheese drawer and skipping the basil leaves). I used cheddar, gruyere, a wee bit of Parmesan, and  Cotswold Double Gloucester (which just happens to make the best grilled cheese sandwiches ever). The bites with the Double Gloucester were AMAZING! Next time I'd zing up the recipe with a little bit of onion, cayenne pepper, and ground mustard. 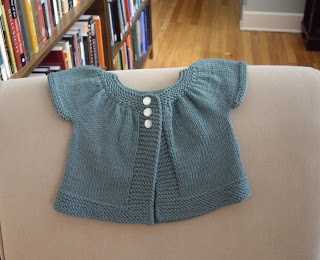 pattern: Baby Kina, by Muriela
yarn: Debbie Bliss Baby Cashmerino, 1.75 skeins
needles: Clover US 4 bamboo circs
size: 6 months
my Ravelry project page
notes:
Fantastic little pattern! Very easy to knit, and not fiddly at all. I love the gathering at the yoke. The yarn is wonderful to knit, and I'm sad that my Baby Cashmerino stash is pretty much depleted now (although I suppose that's a good thing, as there's plenty more yarn marinating in the craft room).

I wonder a bit about the buttonhole placement. They seem a bit off center -- I might move them closer to the edge of the button band next time. I'll definitely knit this pattern again! There's even a version for grown-ups.

- tutorial for making a very cute cable knit pillow cover at Craftastical
Posted by Jodi at 10:00 AM 14 comments: 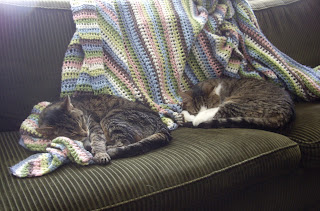 I moved the stripey crochet blanket out to the sofa, and the cats are absolutely enamored of it. They're oddly drawn to crochet blankets, much more so than their handknit counterparts. The mysterious inner workings of cats... 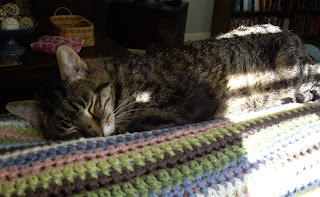 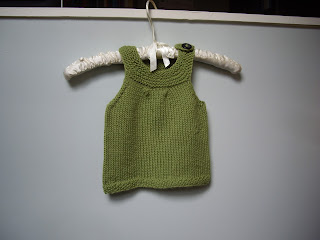 pattern: the Emma tunic, by Jennifer Alexander
yarn: Lion Brand Superwash Merino Cashmere, 2.5 skeins
needles: Clover US 6 and US 7 bamboo circs
size: 6 months
my ravelry project page
notes:
I love it! The pattern's very quick to knit, and it's pretty darn easy. The little tucks in front are a cute detail, and it was fun to figure out how they worked. Jennifer Alexander's instructions for them are pretty clear. The yarn is leftover from another baby shower gift, the butterfly baby cardigan, and I liked it much better knit at a slightly tighter gauge. The color is great, especially this is a gift for a mom-to-be who's very eco-friendly and not too much of a girly-girl.

- Have you heard about Coastal Knits, a pattern book collaboration by Hannah Fettig from Knitbot and Alana Dakos from Never Not Knitting?  This looks absolutely fantastic! I'm immediately drawn to Alana's Gnarled Oak Cardigan (so pretty) and Wildflower Cardigan.

- This recipe for easy beer mac and cheese looks amazing.

- The state of Illinois is cracking down on Nice Cream, a local artisanal ice cream company, in a move that seems pretty ridiculous. I understand food safety concerns, but this seems so minor... This may have major implications for many of the small-scale local food makers here in Chicago.

- We're heading to what may be the nerdiest summer event in Chicago tomorrow night! The Chicago Symphony Orchestra is playing music from the Fellowship of the Rings at the Ravinia Festival. While the movie is shown on a jumbotron, thousands of fans will picnic on the lawn, sip champagne, and nibble on elven lembas bread. Egads... it should be legendary indeed.
Posted by Jodi at 3:21 PM 10 comments:

After a very hectic and stressful week, I was delighted to spend some quality time in the kitchen yesterday. Not only did I make my first French tomato tart of the season (always delightful), but I also gave the ice cream maker a workout. 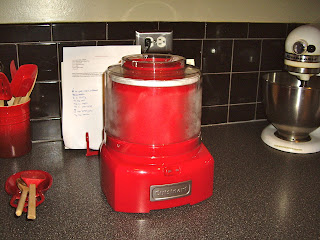 The flavor profiles in Jeni's Splendid Ice Creams at Home are so inspiring and creative! I am less enchanted, however, by the number of steps in the recipes. What's a cook to do? Inspired by Jeni's recipe for goat cheese ice cream, I "unvented" my own version, using the fail-safe "technique" from my cream cheese ice cream recipe. I paired it with a baked rhubarb compote, again inspired by a Jeni's recipe, but jazzed up with some citrus and ginger. 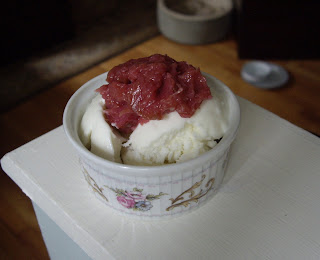 Blend all ingredients in a blender until smooth. Freeze mixture in ice cream maker (I use a basic Cuisinart ice cream maker) for abut 18-20 min. Transfer to an airtight container and put in the freezer to harden (at least 2 hours). Let ice cream soften for 5 min. before serving.

NB: Pop the airtight container you're going to use to store the finished product into the freezer before you start working on the ice cream. That way it will be nice and cold when the ice cream maker is done, and the ice cream won't melt when it hits a warm container. Makes for a better, more consistent texture!

Preheat the oven to 300 degrees F. Combine all ingredients in an 8-inch square Pyrex baking dish, stirring to mix well. Bake for 45-60 min., stirring every once in a while, until the rhubarb begins to fall apart.

NB: You can use frozen chopped rhubarb, too. My local Whole Foods carries Stahlbush Island Farms frozen rhubarb year-round (at an affordable price, to boot), and it works great! Don't bother to thaw the rhubarb first, just up the baking time a bit.
Posted by Jodi at 3:52 PM 15 comments: