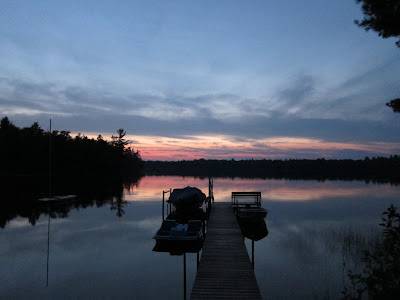 We're back in the city after a relaxing long weekend in the north woods of Wisconsin. Swimming, boating, and plenty of reading and knitting -- just the prescription for what has been a rather hectic summer so far. 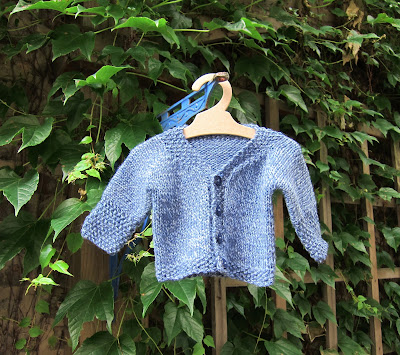 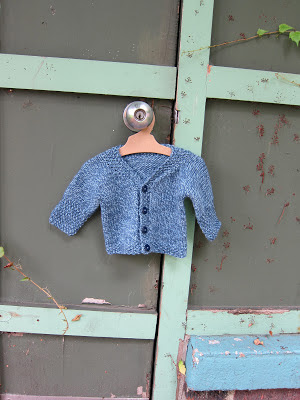 My gauge was a little off, but I was happy with the fabric, so I followed the measurements for the next size smaller.

Not my favorite pattern -- the increases on the neck are awkward and result in puckering. It really is easy, though. The yarn is also not anything to write home about, but it had been marinating in my stash for years, and I was very happy to use it! Still two more skeins left, however.

The buttons are basic navy blue plastic ones from JoAnn (yes, I used them for the bitty cabled cardigan, too). As usual, I delved into my embroidery floss stash to sew them on.
Posted by Jodi at 6:30 AM 4 comments:

I swear, this is going to be the warmest, coziest baby in North America. I haven't just been knitting -- I've also been crocheting for our little guy. I find crochet quite soothing and relaxing. I could work on this afghan even at the queasiest and most exhausted point of my first trimester. 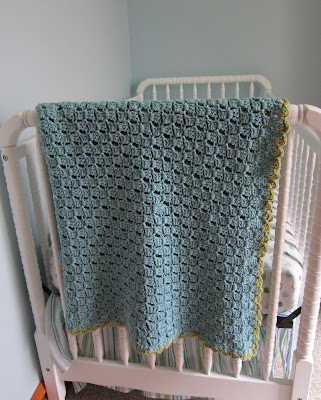 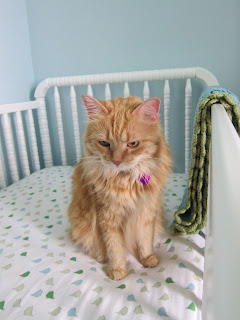 notes:
Yes, yet another diagonal box-stitch afghan! Love that stitch pattern. I've said it once, but it's worth saying again: working corner-to-corner is amazing. No need for fiddling with a foundation chain -- mine always end up too tight. I did many more repeats of the stitch pattern and skipped the hood. 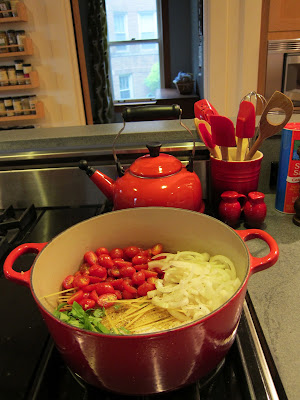 Have you seen this one-pot-wonder recipe making the rounds on Pinterest? 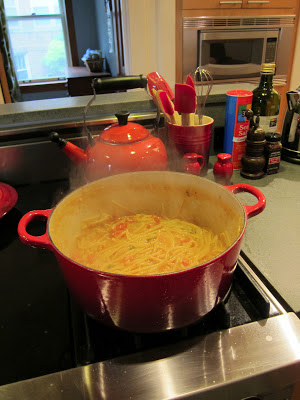 I was intrigued, so we gave it a try. It goes against everything I thought I knew about making pasta -- you throw in everything all together with very little liquid. The flavor permeates the linguine noodles themselves. 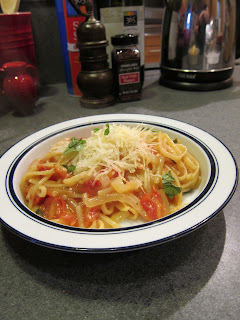 Absolutely delicious, especially considering how easy and quick it is to make! Next time I'd add some chopped sun-dried tomatoes to make the flavor a little richer. Topping it with some browned Italian chicken sausage or sauteed shrimp would kick it up a notch.
Posted by Jodi at 6:30 AM 6 comments:

Thanks for all the kind words about our big news! Once I got over my morning sickness, I was bitten pretty hard by the baby knitting bug. This cabled cardigan is absolutely teensy, and I know that our little guy will fit into it for approximately three minutes, but I couldn't resist.

Plus it turns out that baby knitting is a great way to use up leftover yarns and those random single skeins I used to pick up at fiber festivals. 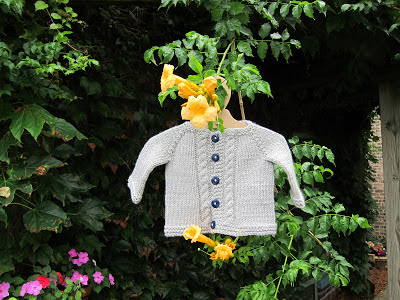 notes:
Easy-peasy wee cardigan! I love the top-down construction, and the cables were fun to knit. Next time I might reverse the cables on one side so that they're mirror images. A very fast little project. I picked out the inexpensive navy buttons at JoAnn. I've kind of given up on finding great buttons -- if you have any bright ideas or great sources, please share!

This is a pretty strong contender for what our little guy will wear home from the hospital this autumn. : )

letting the cat out of the bag 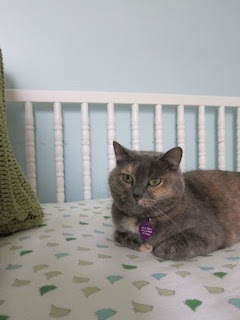 Some things have been happening behind the scenes chez A Caffeinated Yarn. 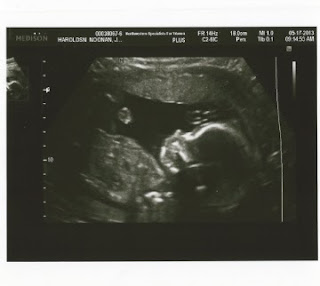 Paul and I are expecting a little one this fall. Our baby boy is due Oct. 2. : ) We are through the moon with excitement. 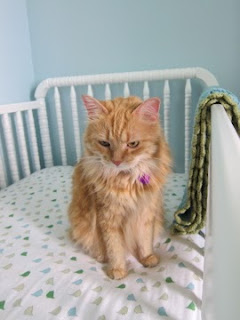 The cats are big fans of the nursery so far -- I keep finding them snuggled up in the crib. We'll see how they feel about the actual baby! 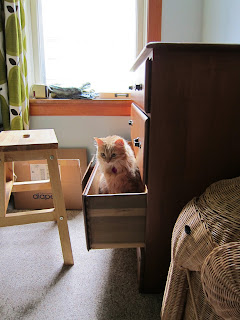 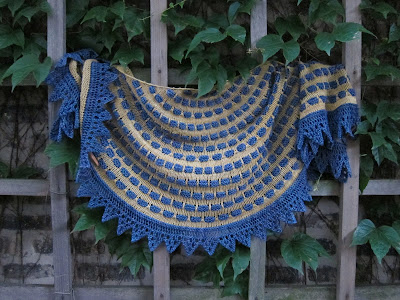 In a moment of idiocy last spring I purchased a skein of Malabrigo Arroyo for the contrast color on my Pop Spots shawlette -- this was to go with some ochre-colored Malabrigo Sock from my stash. Kind of a frustrating project. I initially wanted to make this in ochre and natural, but no yarn stores in the area stocked Malabrigo Sock in natural, so I (being the impatient sort) went out on a limb and bought blue. The combination just isn't what I had envisioned, though it's perfectly nice. Making the spots seemed magical the first few rows, but became a chore as the project wore on. Making the small version was a good choice. 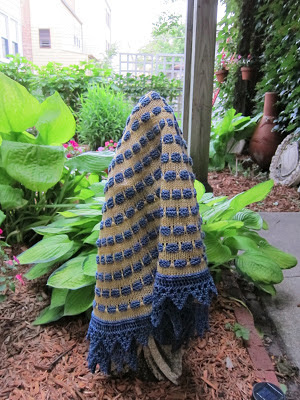 The cats, on the other hand, enjoyed many aspects of the Pop Spots process, from blocking... 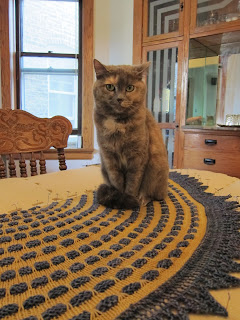 to supervising the backyard photo shoot: 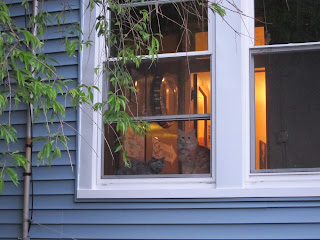 But it's done! And I love the contrast edging! All's well that ends well, I suppose. 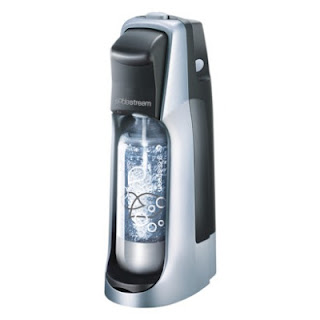 Paul recently presented me with a Sodastream machine, which I was hesitant to use at first (it emits an alarming loud buzz that scares the cats), but which I am now loving. Mostly I use it for sparkling water and add a slice of lemon or lime, but I've also added homemade ginger syrup and... 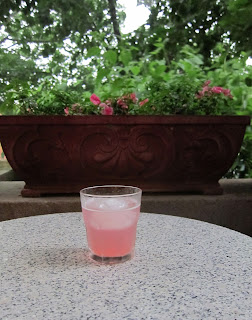 homemade rhubarb syrup. Rhubarb soda is pretty much the best thing ever. The rhubarb syrup gives it a beautiful rosy hue, and the taste... just delightful.

I made a double batch of rhubarb syrup on Saturday morning and used the "spent" rhubarb to top Swedish pancakes. Delicious! I followed Alicia's recipe for Swedish pancakes this time, and they're just perfect.

As many of you know, Google Reader is dead, alas. I've been trying out Feedly, Reeder, Bloglovin, and Flipboard, and I just signed up for The Old Reader. None has won my heart yet, but I'm giving it time. I'd like something that keeps track of what I've already read across multiple platforms (the various computers I use as well as my iPad). Let me know if you have any favorites or suggestions, please!