Last Saturday started off perfectly with a trip to Chicago's Green City Market. Berry season is in full force. When Paul admitted that he'd never tasted a black raspberry, I was flabbergasted. 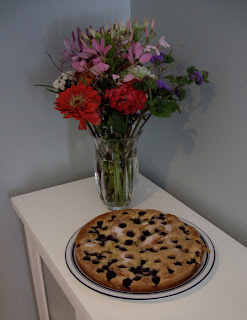 Not only did we eat 1/2 a pint immediately upon returning home, I turned the rest into a (Black) Raspberry Buttermilk Cake. The Kitchen Aid's virgin run was a success, though using it feels like cheating. Monsieur Kitchen Aid just churns away and does most of the work for you. I'm pretty sure my arm muscles will now turn to limp noodles as a result. 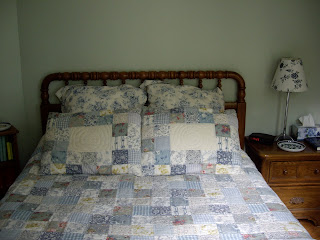 On the topic of new things, I did something rather wild in our new place. I threw caution to the wind and did NOT paint our bedroom blue. Shocking, I know, but the whole open living/dining area was already a peaceful shade of light blue, and it opens into our bedroom. So more light blue could have been overkill.

We went with Behr Premium Plus Ultra ("paint and primer in one") in Sliced Cucumber, a very "Martha" shade. I wasn't that impressed with the paint -- it still took two coats plus a good amount of touch-up work, and it didn't seem to want to stick to the wall. That said, painting conditions were less than ideal, as it was super humid (and we were working at night part of the time). In retrospect, I probably should have manned up and done a third coat.

Doesn't Kylie look alert and kittenish in this picture? My ferocious old biddy is mellowing as she reaches 15 years. 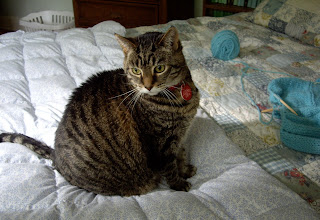 Wonder of all wonders, I trimmed almost all of her claws over the weekend! The girls' previous owners had never bothered, and the cats were resistant to it when we first adopted them, so I gave up. But now we have a whole lower level of brand new carpeting, and I thought it was time. Oddly enough, Kylie (the fierce one) minds it less than sweet Capricha, who's generally good natured and friendly.

And the knitting in the background? 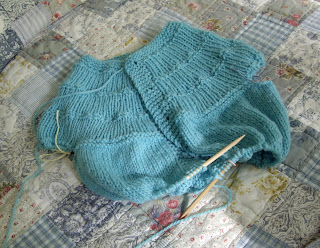 A Shalom (with sleeves) for my mom, knit in a discontinued shade of Cascade Eco +. SouleMama just knit a second one that's even more beautiful than her first one, and I couldn't resist the pattern any longer.

A parting shot of my kitters, curled up in a sunbeam: 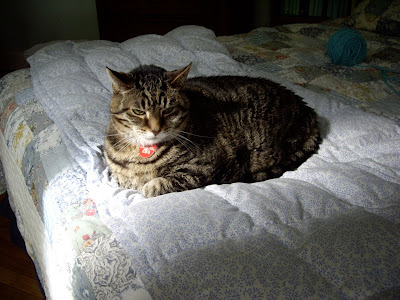 Hi, kitty! Also, I like the bedroom color. It's very soothing!

Aw, she looks so sweet!! The bedroom looks lovely - and I adore your quilt/spread there.

Thanks for the recipe! I was racking my brain for something new for our 4th of July BBQ--what would 4th of July be without a big BBQ?--and the buttermilk cake will be perfect in the heat of the afternoon. I am also working on 2 top-down sweaters. Nice to find someone who likes to do it that way and doesn't think that's a nutty way to knit.

So cute! I love that paint color and I agree, that would've been overkill with the blue.

You know, I have never worn my Shalom. I think I'd wear it if it had sleeves. It's probably destined for the rip pile.

So much good stuff! I've finally given up trimming my kitty's claws ... and have the vet do it. She throws such a hissy fit, it's just not worth it. Lovely paint color!

Keep us posted on the Shalom. I'm going to start a KAL with a friend in the next week or so, so we're looking for hints!

Anonymous said...
This comment has been removed by a blog administrator.
1:29 AM

Your new place is beautiful - at least what you've shown of it. I'm a blue girl, too. I went with paint and primer in one and it took two coats but my place was painted in the fall.

By the way, there's a younger man (13 yo boy kitty) who sends head butts to your sweet girl.

I love your bedding. Did you make the quilt?

NEVER ATE A BLACKBERRY? oh my. That pie looks delicious.