It's officially spring break, and I'm breathing a big sigh of relief! The past few weeks have been a mixture of hectic and wonderful. My knitting circle had its annual retreat last weekend, and much fun was had by all. Only one narrow escape: I nearly drove my Jeep right into a downed tree on a winding country road as I came over the crest of a hill. Thank you, trusty brakes... 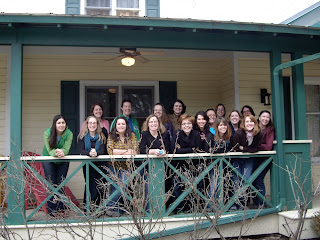 I finished up this little guy, whom I've named Lars in honor of his blue and yellow attire: 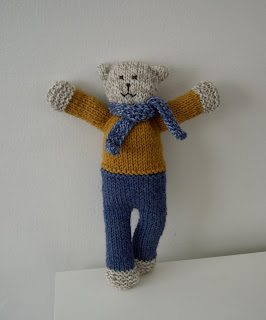 And got a good start on his friend, who still needs a face and ears: 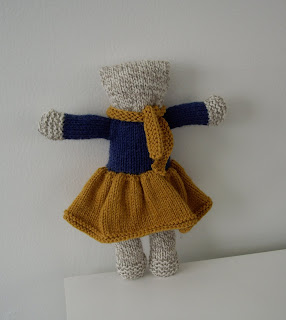 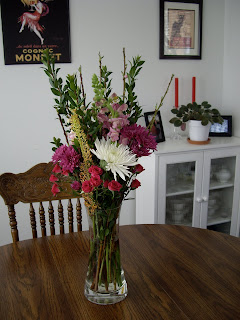 I have some big plans for spring break -- finishing up my blue cabled blanket, sewing buttons on my cabled cardi, finishing up teddy bears #2 and 3, and trying out the afterthought heel technique on a sock. Girls gone wild, I tell you!

We've also been apt. hunting, which is its own form of hell, in my book. Afterward it's a great source of conversation topics (like the eternally hilarious combination shower/sink I once saw in an apt. near Lake Mendota in Madison), but not nearly as delightful while you're in the midst of it.
Posted by Jodi at 12:00 PM

The teddy bears are awesome! How nice that they are going to have a friend :-) I agree that apartment hunting is a form of hell, which is why Jesse and I both commute in highway traffic half an hour each way: we couldn't stand looking for apartments closer to where we work any more so decided to stay put. But then on the way home from various apartment viewings, we did enjoy discussing the awfulness or oddness of the places, people, or decor we'd just seen. Enjoy your spring break.

oooh, so fun! i'm a little jealous of your knitting circle retreat -- what fun! (and what a perfect start to the break.) good luck apartment hunting -- my fingers are crossed that you guys will find the right place.

Glad your breaks were up to the task! Knitting retreat sounds *wonderful* what a great way to start your break. Enjoy it! Love the little bears - so cute.

That Teddy Bear pair are adorable. Good luck with that apt hunting!

Lars and his friend are adorable!
Good luck with the apartment search.

What cuties!! I love that they're dressed in Swedish flag-inspired colors. It sounds like you have a fabulous spring break planned. And good luck with the apartment hunting!

Yikes - glad the brakes saved the Jeep and you!!!

I love to see what you come up with to knit. You have a great eye and again you deliver. Super cute bears - gifts or for keeps?

I used to watch a TV show called House Hunters on HGTV. I can't begin to imagine what you're working through and am so glad that stage is behind me. Good luck!!

that sounds like an awesome spring break to me! and a knitting retreat?! so jealous!

those bears are just too cute.

Love those bears- so much personality!

yay for break! And knitting retreats!

The bears are so cute!!!

And the knitting retreat sounds wonderful.

Um, sometimes you wonder about the ads. Hope you find something you like soon.