Alas, I'm wallowing in the depths of a summer cold. Last week I could sense it coming on, so Friday night Paul and I skipped a b-day party and stayed home to watch Pan's Labyrinth. (an excellent but disturbing film). My Spanish is OK, but I knew I would have to look at the subtitles some, so I cast on for an easy project. 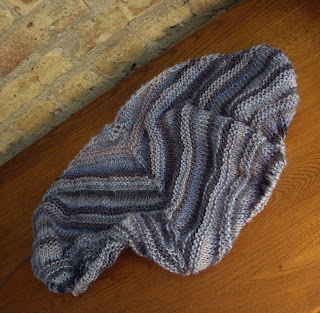 Apparently I've caught not only a cold, but also START-ITIS! I hear it's highly contagious. This is the Simple Yet Effective Shawl from cosmicpluto knits!. I fell in love with Larissa's version back in June. The yarn is Rowan Tapestry. I'm using US 8 needles, and it's creating a nice, drapey fabric. My SP10 sent me a couple skeins, and I found a couple more (of the same dyelot, no less) in the sale bin at Arcadia last week.

Saturday and Sunday were spent in The Land of Milk and Honey (AKA Wisconsin). After surviving a family gathering in the green rolling hills outside of Mt. Horeb, Paul and I took a brief detour through Madison on the way home. We walked down State St., around the Capital, and down Langdon. My throat hurt too much to enjoy a beer at the Terrace, so I alternated between people-watching and sneezing ferociously while Paul enjoyed a Spotted Cow. We stopped for dinner at the new Paisan's on Lake Monona, which attempts but fails to recreate the dark, rather dingy atmosphere of the old University Square location. I'll stick to their more upscale cousin Porta Bella in the future. :-) Many an event has been celebrated there over the years (like the night Paul proposed!!!!).

Speaking of good things from Wisconsin, many thanks to Peaknit for the award! I like the spirit of the thing, even though the button sports a very Barbie shade of pink.

I accept with pleasure! I'm passing this honor on to a few more marvelous female bloggers:
- Micki at A Thing 4 String
- Nicole at cocoknits (who has inspired me to use bloglines at long last)
- Jana at Exile in Knitville
Posted by Jodi at 1:34 PM

Beautiful. I love your version of the shawl.